Taking a LEAP into BAC

So I did mention that I bought BAC (Bank of America) LEAPs earlier this month.  I am a big fan of financials at these prices but haven't been the biggest fan of BAC.

Goldman Sachs (GS), JP Morgan (JPM) and Wells Fargo (WFC) are much better managed, much solider firms and are very cheap (especially GS now more than the other two).

Brian Moynihan who is running BAC now has nowhere the credibility and track record of Jamie Dimon or many other financial CEOs.

But the stock is certainly cheap so I decided to take another look.  There are a lot of unknowns here, as usual, most importantly the representations and warranties problem in their mortgage business and of course the continuing question of whether the economy will recover.

Here are some pages from BAC's investor day presentation in March of 2011. I am mostly interested in what they think they can earn in a 'normal' environment and see what the stock valuation is assuming they are right.

I don't think these estimates are unreasonable as long as the economy continues it's recovery. 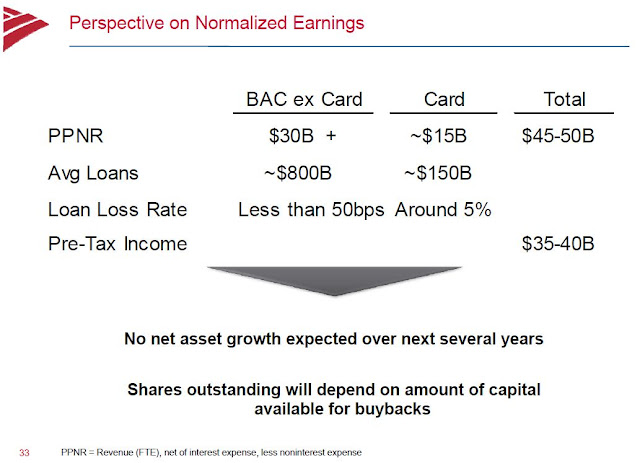 To get a feel for what loss rates were at BAC recently, here are some slides from the same presentation: 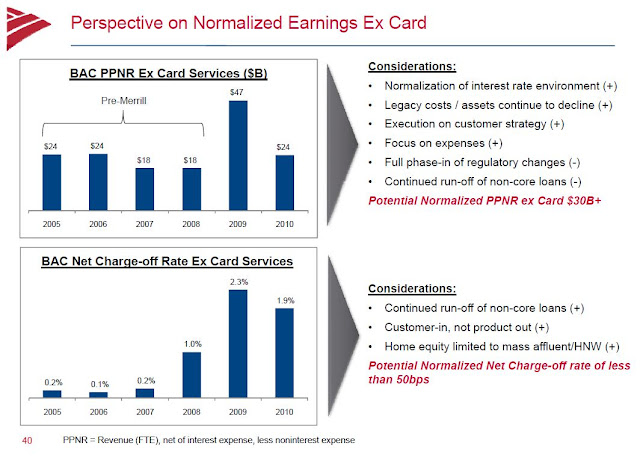 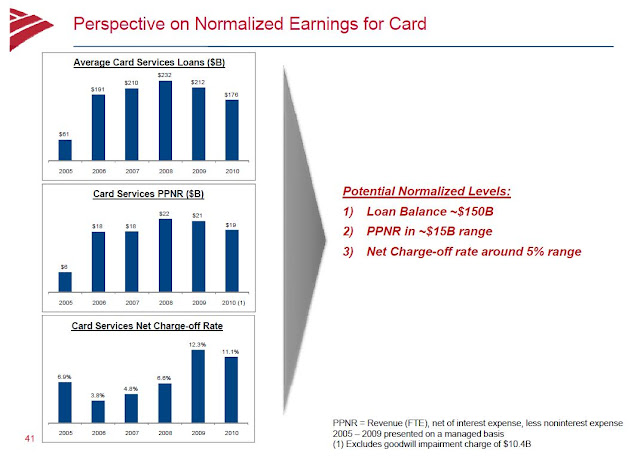 So it looks reasonable to assume losses will come down to more normal levels as the economy recovers.  Credit trends continued to improve in 2011.

Here is the breakdown of their expected, or target ROTE (return on tangible equity): 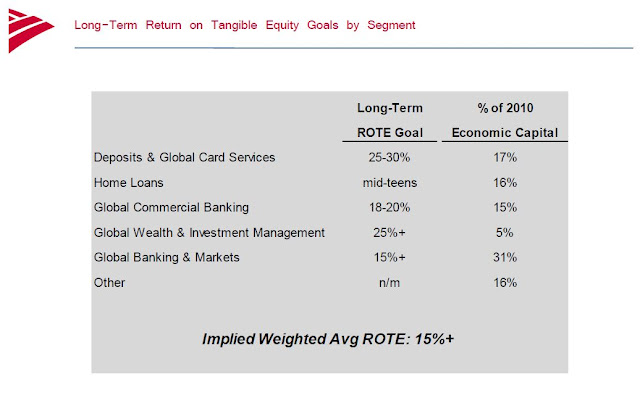 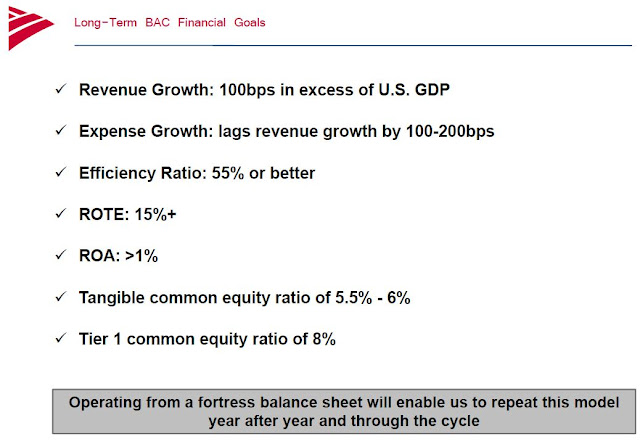 This chart shows what BAC thinks they can achieve over time.  The 'simple' way to value bank stocks these days seem to be based on a ROA level, multiply that by total assets and divide by the number of shares.  Of course, this is very simple and doesn't capture everything but when there is so much uncertainty and unknowns, it's not a bad place to start.

Here are some snips from that:

Although I don't have as strong a feeling for BAC's management as I do with GS, JPM and WFC, Buffett seems to like them.

He does own preferreds and warrants on BAC so he really believes BAC is a good business and a lot of upside potential.

Here is the basic model Berkowitz uses for BAC, which is reasonable: 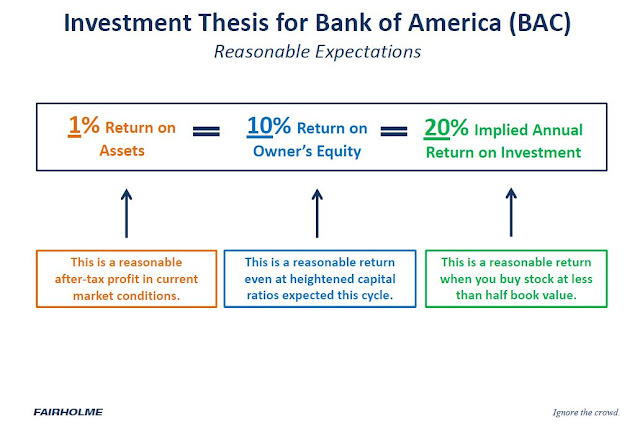 
The chart below shows the tragedy that is BAC in the past few years, and what might be a great opportunity going forward. 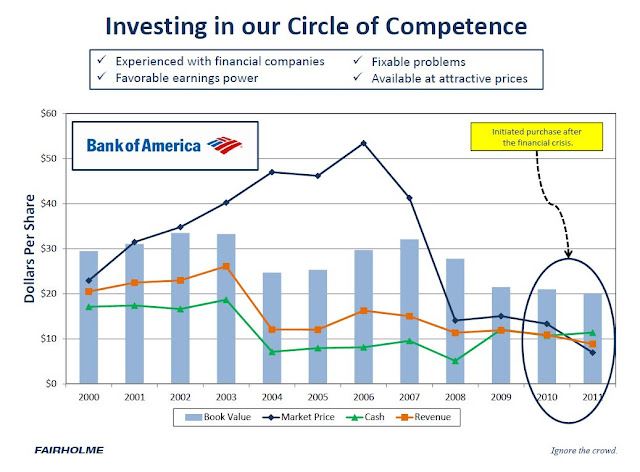 The following table is a little outdated as BAC now is up to 0.5x book, but it is still pretty cheap.  I don't know if banks will ever get back to 1.83x price/book that is the 15-year history, but I think many of these financials will get back to book value and maybe higher depending on how the economy unfolds. 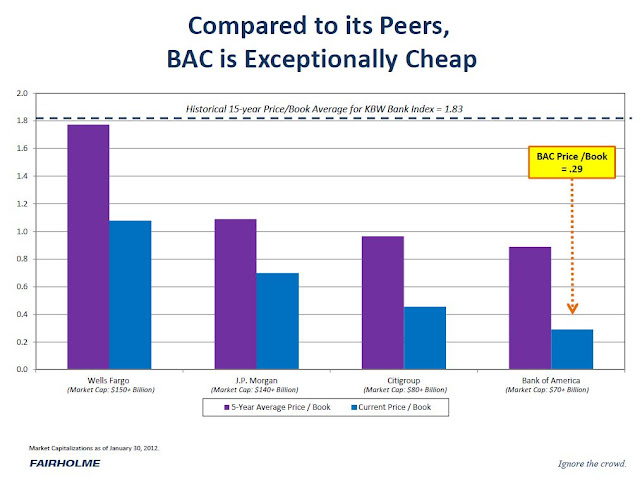 Representations and Warranties and Other Legal Exposure
There are plenty of risks with BAC, of course.  The above is a pretty clean scenario where things work out OK for them; no big boom in the economy or strong asset growth, but no big disasters either like another downleg in the economy or housing markets or worsening in the mortgage legal problems.

For the Reps and Warranties, BAC has reserved $15 billion or so and they think that if things worsened there can be $5 billion more.  So BAC and the street basically sees $20 billion or so at most in this problem.

If that is the case, this won't be a big issue going forward as $15 billion has already been reserved.  It looks like there is activity on some sort of settlement in this area.

The other point is what Dimon has said several times in the past.  Even if things don't work out too well with these legal issues, it will take years to play out.  We're not going to see some sort of big settlement or problem where billions will have to be paid out immediately.

So it is possible that the market fears this too much and sees it as an immediate liquidity/capital issue if the legal risk increases for whatever reason.

The risk here in a sudden worsening and need to raise capital due to these legal issues is basically seen as an equity dilution issue; how much stock would they have to issue to raise enough capital for an adverse legal development?

Perhaps pollyannically, I tend to think that the pressure is on for some sort of settlement.

But this is certainly a risk, as is the economy and housing markets despite things looking quite a bit better now.

The markets obviously were nervous about the results of this stress test.  The rally in bank stocks after the release shows just how worried people were.

One thing to remember, though, is that firms like GS, JPM and WFC (and many others) came through a 'real' stress test in the crisis and came out just fine.

I tend to think that BAC would have had no problem either if they didn't buy Countrywide at the worst possible time, and of course Merrill Lynch that almost took them down.  Without those two acquisitions, despite having been a huge bank with a lot of exposure to housing, they would have been fine.

Net Interest Income Risk
Of course the other big risk that applies to all banks is the continuing low interest rate environment.  It seems the healthy banks are making decent spreads so things are still fine at this point, but if the economy continues to be weak and housing doesn't recover, interest rates can remain low for an extended period of time putting pressure on interest spreads.  Japanese banks have interest spreads of less than 2% and that's why it's hard to value them for more than book value.

This is a risk in the U.S., but I tend to think that the U.S. will do a little better than Japan due to demographics and other favorable factors.

I know people keep saying that so it's good to be skeptical.  Who'da thunk the Feds Funds rate would be zero?  If you told people in the year 2000 (I did) that U.S. long rates can go to 2.0% or even 1.0% like in Japan, people would have laughed at you (they laughed at me, even though I didn't really predict this financial crisis or housing bubble/collapse).

I do tend to believe the housing market will normalize at some point and won't be flat on it's back forever, which makes me more comfortable with financials.

Maybe the housing market will be a future blog post.

The LEAP Trade
The economics don't look as interesting as when I put the trade on, but it's still pretty interesting.  Let's take a look at the January 2014 10 strike call option, for example.  It's now at around $2.25/option.

Over the next two years, if the housing market starts to recover and there is a bit more clarity on BAC's legal problems, it's not a stretch at all to see BAC trading at book value of $20/share or 10x a 'normalized' earnings of around $2.00/share.

In that scenario, this LEAP would be worth $10.   If this happens before January 2014 and the stock price gets to $20 before then, the LEAP would be worth more than $10/share (even though it might not have much of a premium due to it's high in-the-moneyness).

If things don't improve and we muddle along and there is no improvement in anything and the stock is stuck around $10 or lower, this option is worth zero.

So let's say there is a 50%/50% chance that things start to normalize over the next year or two.  I think the likelihood is actually much higher than that.

50% normalizing economy/markets: LEAP is worth $10
50% normalization doesn't happen, or a total disaster happens:  Leap is worth $0

The expected value of this LEAP is $5/option.

If you change the odds to 75% chance of normalization within the next two years versus 25% of no improvement or total disaster, then the LEAP is worth $7.50/option.

Of course, this is way oversimplified, but this is the binary way I would look at this.

Also, it's important to keep in mind that the housing markets and economy doesn't have to recover or normalize by January 2014.  All that is needed is for the market to have some comfort that this will happen at some point in the near future.  Once they get comfortable, stocks can trade ahead of the reality and reflect 'normalized' earnings.

I would certainly call this idea 'speculative' as it does involve an option, a business with a lot of unknown risks and a management that I don't necessarily have the confidence in as much as Buffett seems to (and as much as I have for other, proven well-managed financials).

But I *do* like it as a levered play on a normalization in the markets.  There is a good chance that there is still way too much pessimism and fear with respect to financial stocks in general and especially at troubled institutions like BAC.

Merrill Lynch
There has been a lot of talk over the past couple of years about spinning off Merrill Lynch; that Merrill Lynch has a lot of value and the market would give it a higher value if it was spun off.

I will take a look at that in a possible future post, but right off the top of my head, one big problem with that thesis is that other independent investment banks too are trading cheaply.

Goldman Sachs is trading under book value and just over tangible book value per share, and Morgan Stanley is actually trading at 0.6x book value.

So I wonder how much value would be added to BAC as a whole from a Merrill Lynch spinoff.

In any case, I will take a look at it and may make another post.

Email ThisBlogThis!Share to TwitterShare to FacebookShare to Pinterest
Labels: BAC