This is not a blog that tracks the buys and sells of hedge funds or anything like that, but I just stumbled on this so I thought I'd post it.  (Of course, a hedge fund manager liking gold is hardly breaking news, but...)

We all know Stanley Druckenmiller; he needs no introduction (if you do, just google him and there is plenty of short articles about who he is).  He ran the Quantum Fund (Soros' Fund) and then his own hedge fund Duquesne Capital (which he actually started before joining Soros and continued to run during his time there) but closed down Duquesne in August 2010.

I noticed that websites that track hedge funds dropped his investment activities as Duquesne Capital no longer files 13F's.  Well, that makes sense as it no longer exists.

But I did notice by chance that Druckenmiller started filing a 13F again but this time as "Duquesne Family Office LLC".  So this is his own money.

I find this interesting for a couple of reasons.  Of course, Druckenmiller is one of the all-time great traders/investors, so it's always interesting to see what he is up to.  But what is really interesting now is that he is doing a lot of the work for the family office himself.  His colleagues at Duquesne Capital left to start their own hedge fund (which Druckenmiller invested $1 billion in according to one article).

So the 13F stocks show what Druckenmiller himself really likes.  It's not his other portfolio managers' picks.  These are *his* picks.

You will notice that it's a much smaller list than what they used to file as Duquesne Capital.  That makes sense.

Anyway, here is the 13F that was filed in May for the portfolio as of March-end 2012  (Look up Duquesne Family Office at sec.gov).  See table below.

It is a small portfolio in terms of number of stocks and there are many familiar names in there.  It sort of feels right to me as I feel like I can get a sense for why these stocks would be interesting; Wells Fargo is a great bank, YUM Brands is a great way to get exposure to China without having to deal with Chinese companies/fraud etc..., Chipotle is just recreating the fast food business, American Express is a transaction driven high return on capital business (paid on number of transactions, not loans outstanding etc.) etc...

[Correction (added later):  The GLD position is in the form of call options and the $859 million is just the notional amount; I didn't notice that the first time I looked at the filing.  ]

As of September 2011, Forbes had Druckenmiller's net worth at $2.5 billion or so.  So this $2.2 billion portfolio constitutes most of his wealth.  Given that, this 40% exposure to gold is pretty big.

This is not like some billionaire that files a 13-F, but the U.S. equity portfolio is only 10 or 20% of his net worth or anything like that.  It looks like this is a substantial portion of Druckenmiller's wealth is represented here.  Of course, we don't know the real exposure as Druckenmiller probably has futures and options positions that won't show up here.  We have no idea what his S&P 500 index futures and gold futures positions are.  Also, I am leaning on Forbes' estimate of his net worth too and I have no idea how close those are, never having been a billionaire with net worth estimated by them. 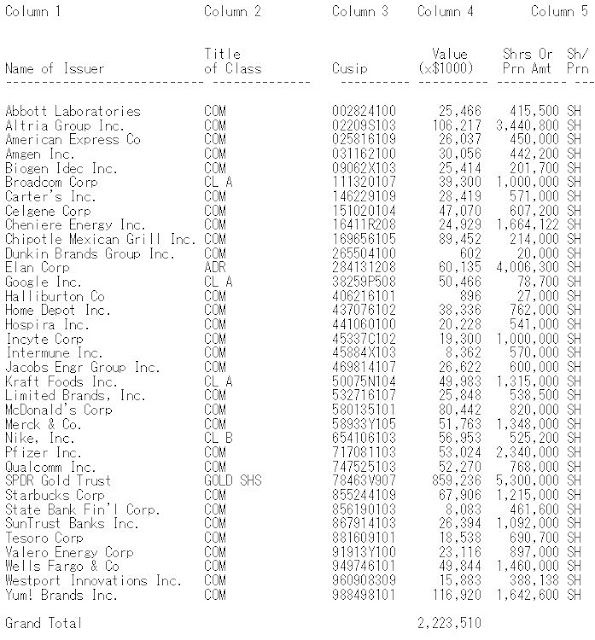 And here's the other puzzle.  The first filing the family office made was in February of this year and there is no GLD position there.  Here it is: 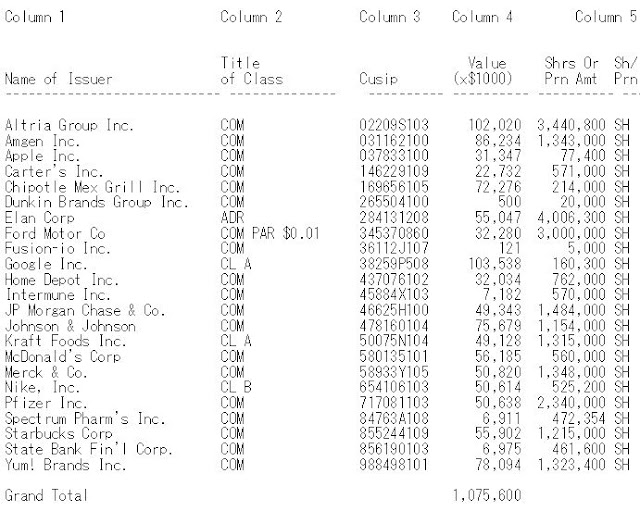 Again, this is a nice, small (in terms of number of names), manageable portfolio of stocks.

First thing I notice is that Apple is here but not in the later filing, so Druckenmiller sold his Apple shares in the first quarter during that Apple frenzy.  I haven't tracked back old Duquesne Capital filings, but I think they've owned Apple for a long time.

Also, he owned JP Morgan as of the end of 2011 but was out by the end of the first quarter.  Did he dump it because he was hearing on the street about the whale and what Dimon would eventually call a tempest in the teapot and then later an egregious mistake?

The other thing, of course, is the GLD position.  It's not there.  So did he just buy gold in the first quarter of 2012?

The problem with these hedge funds is that you never know what their futures positions are from these filings and there are no futures 13-F's (that I know of).

So it's possible that Druckenmiller had physical gold in storage at the Fed, had a big futures position he kept rolling or whatever.  And for whatever reason, he converted that into SPDRs.  This is certainly possible.

That would explain the other thing I notice;  the grand total of the portfolio is $1.075 billion in the December 2011 quarter filing but $2.2 billion in the March-end 2012 filing.

Since the 13-F is for only U.S. listed equities, there could be a lot of reasons for this.  It could be as simple as the above gold position conversion into an 'equity' position.  It could be due to sales of foreign stocks (that are *not* in the 13-F's) and purchase of U.S. equities (which *are* in the 13-F).

It could also be that he took some money back from people he had run some of his money, but there is no proof of that. But if he had assets managed by others, that would not show up in the 13-F.  So that is certainly a possibility.  It could be any of the above reasons (or another reason I didn't think of).  If I let my imagination run wild, it almost looks like he just yanked a billion or so out of a macro fund he invested in and just put it in GLD's instead.  But that is probably not what happened.   It just sort of fits, but we really have no idea what is going on here (other than that he likes gold).

[ Correction:  Since the GLD position is just the notional amount of the call option, the above is irrelevant; there was no addition in the dollar value of the portfolio. ]

Anyway, this post is neither here nor there, but I thought it was a little interesting.  I am a fan of Druckenmiller, even though I haven't really followed too closely what he has been doing over the years (except reading about him in the papers). And I normally don't look so closely at 13-F's and try to "diff" the filings from one period to the next.

Again, this is just something that I stumbled upon, and I think it's sort of a gem in the sense that we get to take a peak at the "pure" Druckenmiller; what he likes with his *own* money doing his *own* thing (and not his staffs), and not under pressure to perform from clients.  It's like peaking into someone's PA (personal account), and that's always fun to do.