I looked at HRG last year to see if there is an opportunity.  Someone called this the next Berkshire Hathaway.  I wrote about it here.

With Falcone in the news a lot again, I thought it's a good time to take another look at this thing.   I will take a completely fresh look at this and a quick look at what Spectrum Brands (SPB) might be worth.

First of all, right off the bat, the thing that immediately pops out is that the market cap of HRG's holdings in SPB exceeds the market cap of all of HRG itself.   SPB has done well while HRG hasn't moved much in the past six months.  Here's a chart of both of them (indexed to six months ago):

OK, so that got my attention.  It's worth a closer look.

Ownership of HRG and SPB
First of all we should remember that HRG is 93.2% owned by Harbinger Capital Partners so HRG owners will basically have no rights; Falcone will do what he wants and there is nothing anyone can do about it.   Of course this can be a good thing too.

Also, since they own 53.7% of SPB, we can be assured that SPB will act in the interests of shareholders (since the largest one is a big one that will keep up the pressure to increase shareholder value).

Mittleman Brothers
This is just a 'by the way', but it was Christopher Mittleman of Mittleman Brothers that wrote that letter last August suggesting that HRG may be the next Berkshire Hathaway.  Just out of curiosity, I was wondering if they still owned HRG and found that it is currently the second largest holding in their portfolio at 11.3%, and they have another 5.4% in SPB.  So together, HRG and SPB is 16.7% of their portfolio (as of the end of March 2012).

A quick googling shows that Mittleman had around $55 million in assets under management so they are pretty tiny (with 1.5% management fee, they may be a less than $1 million in revenue operation, unless they have other revenue sources.  They are not a hedge fund but run managed accounts).

These figures are for the period ended March 31, 2012.  These returns are not bad at all especially given this flat market.  They are concentrated investors (their second largest holding, HRG, is 11.3% of the portfolio).

Anyway, this is not an endorsement, recommendation or anything like that. All I know is what I saw on their website.   I don't know anything else about them.

But it's good to know that Mittleman still likes HRG and SPB, owns a lot of it, and has a decent track record in a pretty tough environment.

Sum of the Parts
So let's take a look at this thing. HRG owns a bunch of SPB and it's a consolidated holding so you have to do some backing out to see what HRG actually owns at the corporate level excluding the consolidated SPB assets/liabilities.

The balance sheet is separated into two sections; "Consumer products and other" and "Insurance".

SPB
First, let's just look at the SPB holding.  SPB is a consumer products company that makes Rayovac batteries and a bunch of other consumer branded products including Remington, Faberware, pet supplies and other things.

Short term investments in the "Consumer products and other" segment was $294 million, and since there is none at SPB, this is all HRG holding company level.

So the two together comes to $581 million in cash, cash equivalents and short term investments. That comes to $4.18 per HRG share.

Insurance
The insurance segment has a net worth (assets minus liabilities) of $668 million.  That comes to $4.81/share.  We know that HRG issued $350 million in debt to buy the insurance business, but the debt is accounted for on the balance sheet in "Consumer products and other" (as "other" is the holding company level debt, cash and investments).

So I will just value the insurance company at how it is accounted for on the balance sheet and the debt will be deducted with the other debt (the net effect, valuation-wise, is the same).

So these are the three pieces on the asset side of the balance sheet.

Let's look at the liabilities.

So on the sum-of-the-parts basis, HRG is worth, at the current SPB stock price, $9.70/share versus the current stock price of $5.16/share, a 47% discount.  HRG is basically a fifty cent dollar!

HRG Holding Company Level Overhead
The above analysis is a good snapshot of what HRG may be worth right now in terms of liquidation value.  This sum-of-the-parts is fine in that sense.  But if HRG is going to be an ongoing enterprise, we have to take into account the costs at the HRG holding company level.  I'm not sure how to think about this other than we should account for it in some way. We have no idea, really, how much is paid out of the HRG holding company as fees/expenses to other Falcone-related entities.

In some large holding companies, this is too small an issue.  Corporate overhead is not an issue at Berkshire Hathway, for example.  The asset base is just too large for it to matter.

But for HRG, I notice that the corporate level expense was $46 million in 2011 for the full year.  That included $27 million in business acquisition-related expenses and $4 million in the Front Street business which is a start-up.  Excluding that, we would have $15 million in corporate overhead unaccounted for in the above analysis.

Capitalizing that at 10x pretax as I tend to do with everything, would give us $150 million in value that we would have to deduct from the total value.  That would be around $1.00/share.  So giving the life/annuity business an 20% haircut and then deducting another $1.00/share for overhead gives us an all-in valuation of $7.70/share.  That's still a 30%+ discount at the current HRG price of $5.16/share.

The first quarter corporate expense was $8 million or so, but I don't know if that can be annualized.  If it is, that comes to $32 million.  That's a lot and it would take a lot of value away from the above analysis.

Other Issues:  European Debt Exposure
The insurance segment doesn't own any European sovereigns, but does own debt of some of the banks. Listed in the 1st quarter 10Q were:

The first two are subsidiaries of Spanish banks in the U.S. and Chile; these are probably regulated and capitalized separately according to local regulations so may not pose a credit risk, but BBVA and Unicredit are exposed to Spanish and Italian local economies.  These two together are $76 million.   I haven't done so but you can apply some haircut to these bonds.  They have taken a $13 million mark down so far on them (not sure how the marks are allocated between them).

Spectrum Brands (SPB)
Since SPB is such a big piece of the value of HRG, let's just take a quick look at it.  I know Mittleman Brothers likes it as they own a big chunk of it outside of their holdings via HRG.  In his letter, Mittleman said Spectrum is recession resistant, but they did go bankrupt in 2009.  If it's so recession resistant, why did it go bust in 2009?

I haven't taken a close look at this yet but it seems a lot of the problems in SPB in the past was with bad acquisitions as the huge operating losses incurred were write-downs of goodwill/intangibles. So it may be that SPB is a decent business at the operating level but management had an awful history (or previous managment) in acquisitions/financing/capital allocation.

If that is the case, the problem might be easy to fix and maybe that's the Harbinger play here.   (Just keep operating the business and improving it and drastically fix the poor capital allocation (i.e., stop bad, overpriced acquisitions).

Here is the trend in adjusted sales, adjusted EBITDA in the past five years. 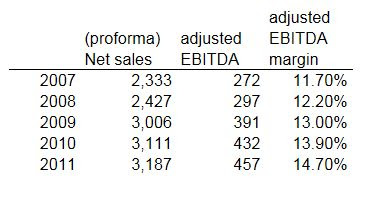 So adjusted EBITDA has been growing and margins have been expanding decently.  Adjusted EBITDA excludes acquisition and integration charges, restructuring and related charges and impairment of intangibles.  SPB merged with Russell Hobbs in 2010 and there are related charges coming from that that will presumably roll off.

Here is a list and valuation of some comparables: 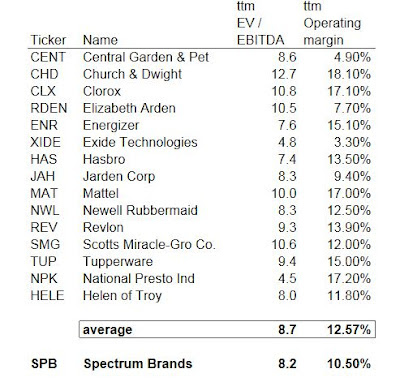 Other than NPK and HELE (which I think are better comps than many of the others), I got these names from the comparables SPB used in their 10k.   Interestingly, Alberto-Culver was listed there in the 2011 10-K even though they were bought out by Unilever back in 2006.  Anyway, as a reference point, the Alberto-Culver buyout occured at 10.7x ttm EV/EBITDA and 1.3x EV/Sales (ttm).   (SPB is trading now at 1.1x EV/Sales).

The adjusted EBITDA of SPB for the past four quarters were:

Shares outstanding as of January 2012 was 52 million and long term debt was $1.8 billion.  Cash and cash equivalents were $74 million.   I know Clorox was mentioned in the Mittleman letter, but I tend to think CLX is a bit more dominant than SPB.  Rayovac is a #3 battery company, for example, and I do tend to think many of the other products are so-so brands.  But again, that's just me.  I haven't dug into it much.

So I would not put a 10.0x EV/EBITDA on this, but let's say 8x is fair.
At $34/share, SPB is trading at around 7.6x EV/EBITDA.  The figure in the above table is from Yahoo Finance and is not "adjusted" EBITDA.

So what is the right EV/EBITDA for SPB?

Energizer Brands is a more dominant consumer battery maker and also sells other consumer products and is trading at 7.6x EV/EBITDA.  I can't really make the case that SPB should trade higher than ENR.  ENR's operating margins are also 15%, higher than SPB's 10%.

For 'cheap' consumer products, I tend to think National Presto and Helen of Troy are good comps and they trade at 4.5x and 8.0x EV/EBITDA.

With $460 million in EBITDA, SPB's valuation would be:

(I ignore cash here as it's small)
Assuming 8.0x ttm EV/EBITDA is fair, SPB is trading at around fair value.

If you want to be aggressive and say that SPB is worth 10x EV/EBITDA, then you can add $4.00/share in value to HRG.  From the above initial sum-of-the-parts analysis of $9.70/share value, that would take it up to $13.70/share in value for HRG  (But this is without the 20% haircut for the life/annuity business and corporate overhead allowance).

Conclusion
This is certainly an interesting situation and there does seem to be value here.  I don't own any HRG at the moment but I will consider buying some.

Of course, there are plenty of risks here.  I think one of them is that Falcone will do a big debt offering (and/or use cash/investments it already has) and use HRG as a vehicle to put more money into Lightsquare, or do some other thing that may not be favorable to HRG shareholders.  I haven't been following Lightsquare too closely, but I tend to think that has sort of turned the corner and the odds of Falcone putting more money into is a bit lower than before.

I will be taking a closer look at SPB too and may post something later on.
Posted by kk at 11:25 AM