So David Einhorn is in the news again lately and I do notice that GLRE is trading around book value so I thought I'd post an update on this.   I posted before that GLRE is a way to get hedge fund exposure at book value.

In the case of GLRE, the idea is the same; to use insurance float to make investments.  The key difference is that GLRE is a pure insurance company and they outsource the investment management to Einhorn's hedge fund (or more specifically, an entity called DME Advisors).  So it's a similar idea but different structure.

Investment Performance Update
One nice thing about having GLRE listed is that they do post returns of their investment portfolio on a quarterly basis.

Here is the latest: 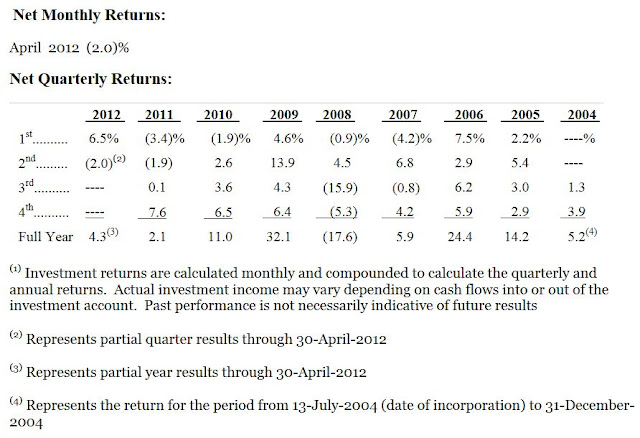 From inception (of GLRE) through the end of last year, Einhorn has returned +9.3% per year.  Going through to the end of April, 2012, the return is +9.5%/year and this is net of fees and expenses.  GLRE pays a 1.5% management and 20% incentive fee to DME Advisors.

(As I keep saying, hedge fund fees are fine if they perform.  What matters is net returns after fees.  If that is good, then fees is not a problem.  I don't see a problem with pay-for-performance.  People who don't perform well and charge high fees will cease to exist pretty quickly).

The largest holdings in the portfolio as of April-end were Apple, Arkema, General Motors and Seagate Technologies.

They also own a large stake in Oaktree Capital Management (recent filing) which I posted recently about (read here).   Oaktree (OAK) is run by Howard Marks who is certainly one of the all-time greats in the investment world.  We can't know what Einhorn is thinking, but I think other than the fact that OAK is a great shop run by great people, I think the counter-cyclical aspect of OAK probably appeals to him greatly.  Einhorn, like many others, sees big problems ahead due to so much debt around the world.  When things blow up, OAK will be there to raise capital and pick up the pieces at great prices.  They will actually *benefit* in bad times.

The portfolio as of the end of the 1Q was 32% net long according to the 1Q earnings call (you can see equity long and short outstanding on the balance sheet), and that was bumped up to 39% net long in April.  GLRE also owns a big position in gold; I think they maintain a 10% position in gold.  There are also some macro bets like currency trades and credit default swaps (against Japan, for example).

Insurance
The combined ratio came in at 102.4% in the first quarter of 2012 versus 103.8% for the full year in 2011 and 102.8% for 2010.  The insurance business isn't really 'seasoned' here yet so it will take more time to see what kind of track record GLRE can develop in terms of underwriting in the longer term.

Investment Leverage
Investment leverage is now a modest 1.4x, but if they can just break even on the insurance business and Einhorn earns 10% net of fees, that's a 14% growth in book right there.  If some of his bets pan out and he starts generating more typical hedge fund-like returns (OK, I hear laughter... bear with me), then GLRE can really grow book even with just 1.4x investment leverage.

Leveraging a Hedge Fund?  Are You Nuts!?
Well, seeing that so many insurance companies are long mostly bonds in what many call the biggest bubble of all time (and a perception that bonds are 'safe') with much higher leverage, leaning on the comfort of AAA and AA credit ratings, Einhorn' portfolio may even be much safer.

Also, I don't know the investment guidelines in Einhorn's hedge funds, but the investments at GLRE do have restrictions (if this is too small to read, just look it up in the 10-K):

Keep in mind that the leverage mentioned above only relates to the investment portfolio and not the leverage at the GLRE balance sheet level.  For example, if GLRE gave $100 to Einhorn to invest, then the 'equity' is $100 as far as Einhorn is concerned.

Conclusion
This is certainly not without risk.  Many things can go wrong here.  Einhorn may not perform going forward.  The insurance business can become a total disaster.  One of them can be enough for this not to work.  Both can happen, which would be a disaster.

But with shares trading at $24.77 and fully diluted adjusted book value per share at $23.29 (1.06x book), it's certainly an interesting opportunity.