I couldn't find a list of the nifty fifty stocks of the early 70's and their p/e ratios to illustrate the difference between then and now, but I did find some lists with p/e ratios of some popular stocks back in 1972.

I found this on the internet and just cut and pasted it (sorry for the different font size; I'm still working on it): 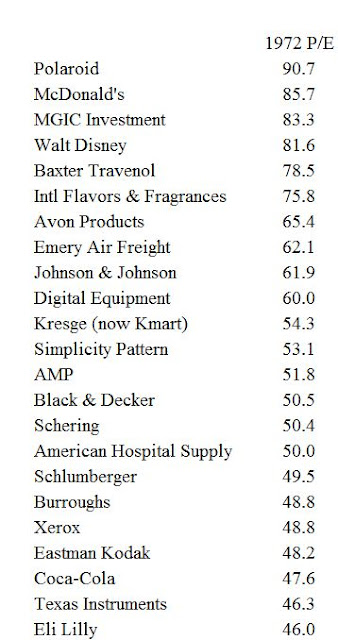 Compare this to the p/e ratios in my recent "Crash?" post.  Of course, it's not fair to compare these high p/e ratio stocks in 1972 to the Dow 30 stocks now; the more fair comparison would be the Dow 30 now and the Dow 30 stock p/e's back then.  But I couldn't find a list handy so this will have to do.

You will notice that a lot of these names were the hot stocks of the day back then and many are large blue chips.   Sears, for example, was the dominant retailer back then as Walmart is now.  And Sears back then was trading at 30.8x p/e versus Walmart's 11x p/e today (Walmart *was* at 30-40x p/e back in the late 90s so the 1972/1999 analogy was a good one).

This table sort of illustrates the difference between then and now.  It would have been fair to say in 1999/2000 that we were headed for years of flatness or an outright bear due to the high valuations, not too dissimilar to the above.

But today, I just don't see these sorts of valuations today even in the popular stocks.  (There are exceptions, of course, like Chipotle Mexican Grill which is trading at 40-50x p/e).

If the key to successful investing is "pricing" the market instead of "timing" the market, then there shouldn't be too much to worry about.   (Maybe I will post about the subtle but important difference between "pricing" and "timing" which people sometimes seem to get confused about).
Posted by kk at 4:49 PM