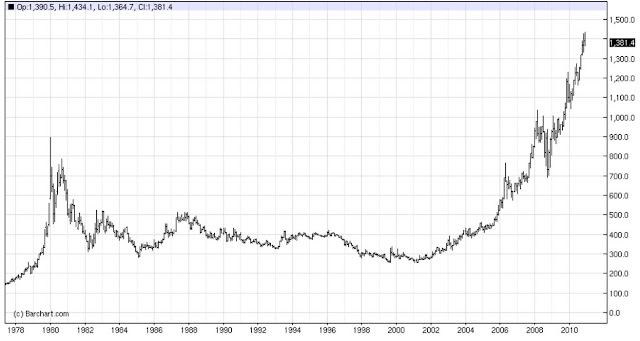 Gold has done really well the last decade or so and more and more people are talking about the inevitability of gold as a wealth saving asset (protection against inflation, monetary pump-priming etc...).

However, a lot of what we hear today sounds a lot like Howard Marks' first-level thinking (see here what that means).  Central banks can't be trusted, money-printing and inflation is inevitable etc...

If the economy tanks, they will have to print more money so gold will go up, or if the economy recovers, then inflation will go up and so will gold.  Either way, gold is going to go up.

The sentiment these days seems to be the exact opposite of the late 1990s.  Back then with gold under $300/ounce, everyone loved stocks.  In fact, if you didn't own stocks, valuation be damned, then you won't be able to afford retirement.  Don't believe me?  Look at stock returns in the past five, ten and twenty years (in 1999/2000, all those periods showed 20%+ returns, I think).  Gold?  Garbage.  Greenspan has everything under control.  With the advanced economic models in use at the Fed, the economy will never tank and inflation will never go out of control.   Even central banks were dumping the gold they owned.  Who needs it?

Where are we today?
We seem to be at the exact opposite point today.  Gold can do no wrong.  If your portfolio has no gold in it, you will never be able to retire, or even make any money.  Stocks?  They don't work.  Stocks are not good long term investments.  Proof?  Look at what stocks have done in the past decade!  Nothing!  Flat!  Look at what gold has done in the past ten years.  Answer?  Own gold, of course.

This seems really silly but this is what almost everything I read seems to say, and many of the very same publications that told us to buy stocks in 2000 if we wanted to retire on schedule are telling us to buy gold, gold stocks and other commodity related things because, sorry, stocks just doesn't cut it anymore.

OK, OK.  I am not really trying to call the top in gold here or anything like that, but if I had to bet, I would bet that a good active stock manager will easily outperform gold over the next five to ten years.

Are value investors wrong?
Here's the other thing that I seem to read alot.  People are saying that old folks like Warren Buffett just don't get it anymore.  They say he is totally wrong about gold.   That he is a fool for buying bank and other stocks.  That he should own gold if he had any brains left.  He just doesn't get it (remember the last time they said that?  Yup.  It was in 1999/2000; he is an old, has-been that just doesn't get it (because he doesn't own tech stocks)).

But first of all, is he wrong?  I have never, ever heard Buffett make a call on gold prices, ever.  So how can he be wrong?  He can be wrong if he said gold will go down and it goes up.  But he never said that.  What he has said over and over is that gold is just not his thing.  He likes to invest in things that produce cash flows and where intrinsic value can be calculated so he can pay a discount to that intrinsic value.

There is no cash flow or intrinsic value for gold that I have heard of.  And that's Buffett's only point, really.  He has said he would rather own all the farm land in this country, ten Exxon Mobils and a trillion dollars of cash for what gold is valued at; gold doesn't produce cash flow, but the other assets do.

It's not a prediction on where gold prices will go, which he would admit he has no idea about.

A similar scenario was happened in the 1970s; it's a good thing he didn't latch onto the gold thing and dump his stocks.    I think the key, as usual, is sticking to what you know.  If you know how to value businesses and know a little about the stock market, you will do much better than owning gold.

It just seems that there are so many experts on gold these days, even some former value investors.  And the funny thing is that they are all saying the same thing and nobody seems to have any more information that anyone else; it all sounds very first-level thinking.   It even feels like some are editorializing with their portfolios.

Gold Standard?!
People seem to love gold so much that many people are even calling for a gold standard now to take away the power of printing money irresponsibly.

On the surface, this sounds like a good idea.  If we link the U.S. dollar to gold, then the Fed can't just print more money and keep on devaluing the dollar, and we will never have a Zimbabwe moment.

We can control either price or quantity, but never both.  If you control price, then the economic adjustments will occur through quantity.  This means that in the economy if we can't ease money, the economy will suffer; that means unemployment will go up.

This was partly due to big spending by the U.S. government, of course. But did gold prevent this irresponsible overspending?  Nope. The fact is that it didn't, and the U.S. had to go off the gold standard.  Politicians will spend.  The public will demand it.  If the gold standard ties the hands of the government, people will demand a delinking from gold.  Otherwise the economy may plunge into a deep recession or depression which would then cause a delinking or devalation of some sort as FDR did back during the Great Depression.  Do we really think politicians will allow constituents to be crucified on a cross of gold? I think not.

Fixed exchange rates are similar to the gold standard.  It is basically a price control, and therefore it is ultimately unsustainable over time.

This is why the 1997 Asian crisis occurred.  Asian countries linked their currencies to the U.S. dollar, but this was unsustainable.  Many thought that the currency link will provide stability as excessive foreign exchange volatility was disruptive.

Well, when you fix the price, then adjustments occur in quantity.  And that often means economic pressures. When the pressures on the economy build up, the price control becomes unsustainable, and when that cracks, all hell breaks loose.


This happened in the U.K. too in the early 90s.  The British tried to keep the Pound within a certain range of other European currencies.  The British had to raise interest rates to keep the Pound within the valuation range and also had to intervene (in the foreign exchange market) .  This put serious pressures on the economy (higher interest rates are not good for the economy) and this was ultimately unsustainable.


The exact same thing is happening now in Europe.  To promote stability, Europe adopted a single currency. But that's sort of like a price control.  They locked in the foreign exchange rate and fixed it for every country in the Euro.  This too was unsustainable from day one.

In the old days, a country like Greece would have adjusted to problems by a cheapening currency.  The Greek central bank would print more money to pay down debt, and the market would lower the value of the Greek Drachma.  This is now impossible.  The banks would have been able to hedge away their Greek sovereign risk by using foreign exchange forward contracts and swaps.   In the pre-Euro world, I would guarantee you that the European banks would have hedged their Greek sovereign exposure by using foreign exchange forwards and swaps and European banks would be in much better shape.

In a single currency Euro world, that is impossible.  The Greek economy can't adjust itself through foreign exchange rates or anything like that.

It has gotten to the point where Greece will either have to leave the Euro, or they have to default.  Either one will be very disruptive to the European banking industry.  The European banks are in crisis largely because of this artificial 'link'; they were allowed to lever up on this illusory stability and now that the fan gets hit, the problem is much worse than otherwise (if they didn't force these price controls).

The other point people don't realize is that if you go back to a gold standard, you basically fix the price of gold.   A crucial point in that case is that you lose a very important price signal.

When gold prices are free to be set by the market, it sends off a very important price signal to everyone that can serve as a warning.

And yet we have the problems of Greece, Spain, Portugal, Italy etc...

You can't really force things by fixing prices or legislating limits.  The only possible solution is for responsible behavior by the governments.  If they can act responsibly then a fiat currency system can work fine.  If not, no amount of legal limits, gold standard or any other thing like that will help matters.