This is a stock that Leucadia owned for a brief time.  I think they paid around $15/share for it and even participated in a global offering of the stock at $17 (per U.S. ADR) back in 2008.  Asked at the annual meeting whether they were worried about the populist policies of the Argentina government, Leucadia said that bad government policy shouldn't hurt the value of CRESY's holdings (mostly real estate and farmland; hard assets that would hold it's value).

Recently, this stock has been trading at $11.70 or so.  Since 2008, we had the global financial meltdown and the European crisis this year and worries about China which has taken down all of the emerging markets.

OK, so let's take a step back.  What is Cresud Inc (CRESY)?  CRESY itself is an old company, a spinoff of collateral assets from a bank many years ago, but is now an investment conglomerate.  CRESY owns a large stake in IRSA Invesiones Y Representaci (IRSA) which is a real estate company that owns commercial real estate (offices, retail, residential).  CRESY owns other real estate companies, but the attention here goes to the 686,000 hectares of land that they own.  This is about 1.7 million acres.

One thing that I should mention is that I've seen a lot of research/commentary on this company with the idea that U.S. farmland is valued at $2,000 - $5,000 per acre while CRESY owns 1.7 million acres and is capitalized at a much lower rate than that excluding it's holdings in IRSA and other equity investments.

However, I am surprised that all of the analysis that I've seen fail to mention that out of this 686,000 hectares, 340,000 hectares of that is natural woodland preserves, so is not nearly as valuable as crop producing farmland.  They also use a lot of the land for grazing and milk production; both of which would be much less valuable on a per acre basis than say, soybean or corn producing land.

In any case, I will look at this stock from this angle in a separate post later on, but for now what attracted me to this again is that according to Yahoo Finance, it is trading at 1.1x book value.

For something like this, I would certainly be interested in it at book value as they probably do own a lot of assets that are understated on the balance sheet. Also, CRESY/IRSA is regarded as shrewd capital allocators (otherwise Leucadia wouldn't have bought into it in the first place).

CRESY's mission is to buy land and other assets at attractive prices, improve them by investing in them to increase yields, for example, and then to sell at a profit.  So this is not a static investment where the entity owns property statically for a long time.

So book value would be an attractive way to 'participate' in their activities.

They are in Argentina, and they focus on agriculture (excluding their stake in IRSA, which is now a consolidated subsidiary).  With increasing food demand due to increase in global wealth, farmland certainly does look like an interesting area to get involved, and South America tends to be a great place to do that.

Of course, Argentina has political/economic problems, but that is a reason why CRESY is cheap.

In any case, let's see how CRESY has done in growing book value per share over time.

First of all, this was a bit complicated as Yahoo Finance figures were wrong, or not complete.  They used undiluted number of shares outstanding to calculate book value per share, and the shareholders' equity used was not U.S. GAAP based.

CRESY does file a 20-F with the SEC every year, but despite the fiscal year ending in June, they don't file their 20-F until late December.

This made things a bit complicated, but bear with me.

I will take a look at this later as a sum of the parts story, but let's also just look at this on a BPS basis.  If this entity's goal is to buy, improve and sell assets, then over time, one would expect the BPS to increase at a nice pace.

Using the above basis (fully diluted shares outstanding and U.S. GAAP based balance sheet), the historical book value per share (or per U.S. ADR) and the ADR stock price at period-end were as follows. 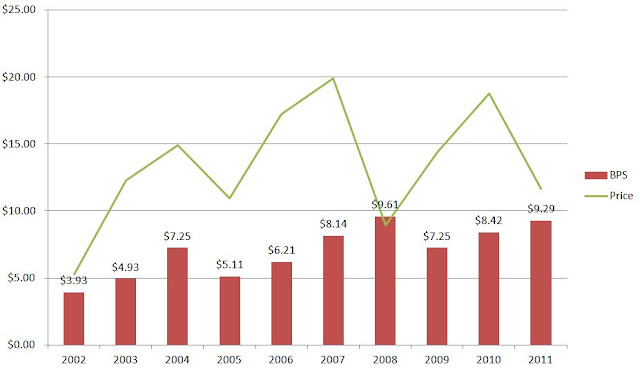 The then current foreign currency exchange rates were used to translate book value per share (BPS) into U.S. dollars.

The above figures take into account the weakening in the Argentinian Peso, so the growth in BPS has outpaced any currency weakening.  This confirms to some extent that real estate, farmland and other hard asset prices hold their value despite a weakening currency.

The price-to-book value ratio has historically looked like this: 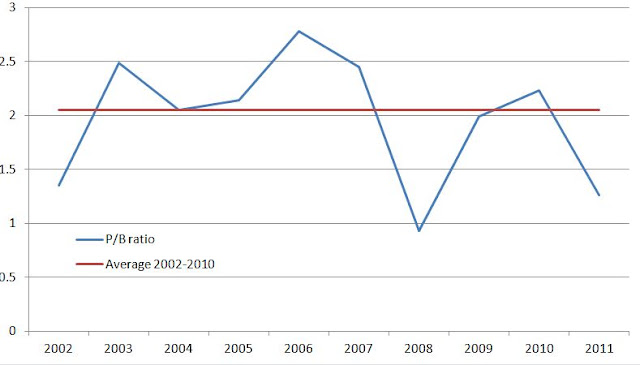 The P/B ratio for CRESY has averaged around 2.1x since 2002, and it is currenty at 1.26x so it is selling at an attractive valuation level compared to it's past.

When you look at a stock like this today, it has all the wrong associations.  Emerging markets?   Increasing food demand globally?  Real estate, land?  Argentina?  Don't they blow up every few years?

This is all quite true, and this is why it is interesting.  Things are much more interesting when they are unpopular and cheap than vice versa.

Food demand will probably continue to increase over time and the need for more arable land is probably very real.  South America will be an important factor in this for sure.

Of course, a major risk is that the Argentine government seems to be doing everything it can to destroy the economy.   Leucadia at some point, even though they said the government can't destroy the value here, did give up and dump their stock.  Maybe they are right.

CRESY also has listed warrants, ticker symbol CRESW but I will take a look at those in another post.

Email ThisBlogThis!Share to TwitterShare to FacebookShare to Pinterest
Labels: CRESY