Renault-Nissan: The Stub Trade from Hell?

Here is a stub trade that doesn't seem to get talked about much.  I remembered that Renault owns a big chunk of Nissan and that it is very valuable.  The talk a while back was that if you backed out Renault's ownership of Nissan and Volvo, you can get the Renault auto business for free.

Well, since we are in such a bad news environment for autos (post 'great-recession' blues), Japan (post-earthquake/tsunami blues) and Europe (Greek/Euro crisis), I thought maybe this stub trade would look interesting.

Renault owns around 2 billion shares of Nissan Motors, or a 43.4% stake.  This is accounted for by the equity method, so the market value is not reflected on the balance sheet.

Reanult has around 293 million shares outstanding and is trading at around 26 Euros/share (Renault uses a lower figure (270 million) for EPS because they back out the shares in Renault that Nissan owns).   The Euro, despite it's problems is trading at $1.3/Euro.  So the market cap of Renault is currently around $9.9 billion.

So if my math is correct, here are the two key figures:

Assuming that the number of shares owned of Nissan Motors has been unchanged over the years, and the number of shares outstanding of Renault has been stable over the years (a quick look at the annual reports seem to confirm this), then this figure (Renault's market capitalization minus market value of Renault's ownership in Nissan stock) historically has looked like this: 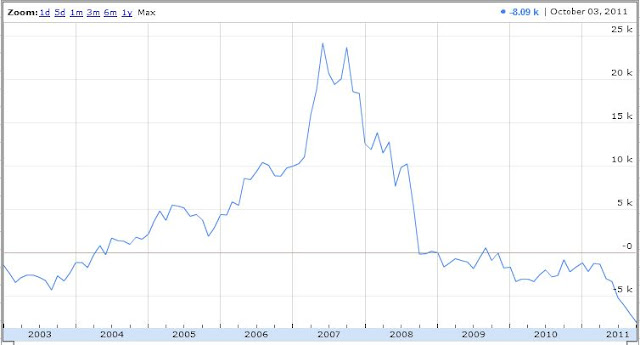 You can see that this number was positive between 2004 and 2008, and you can see how people may have seen this as a good stub trade from 2008-2010.  It did look like Renault was available for "free".  But as the chart shows, a huge decline in that has caused big losses for anyone who had put on this stub trade in the past.

However, just because it was a bad trade in the past doesn't mean it's not a good one now.  This negative spread is as large as it has ever been;  in other words, Renault has never been cheaper on this basis.
Here's another look at this.  Below is the stock price chart of Renault stock (in Euros) and NSANY which is a dollar denominated ADR trading in NY.

As you can see, Renault stock did go up a lot while Nissan declined back in 2007 and now the reverse is happening, Renault stock is tanking while Nissan seems to be stable.   I would guess this has to do with the European crisis; French and other European stocks are getting hit very hard on the financial crisis there.

This may be an interesting way to play it, as if the relationship between the two stocks 'normalize', that can lead to some substantial gains on Renault stock.

What is Renault's business worth excluding Nissan?

Here are some quick fundamental figures:

The figures above are in billions of Euros and they exclude figures for Nissan and other affiliates (that are accounted for under the equity method).  Net interest expense has been around 350 million Euros in the last couple of years, so assuming Renault has similar results to last year in terms of sales and operating income, net income assuming a 40% tax rate would be: 1,100 million - 350 million interest expense = 750 million pretax income.  @40%, that's 450 million in net income for Renault's business ex-Nissan.
At a conservative 5x p/e for that, Renault's business would be worth 2.2 billion Euros.   If Renault can earn a 5% operating margin (Ghosn was targetting a 6% operating margin before the world blew up) and get revenues up to 40 billion Euros, that would be worth 1 billion Euros in net earnings, which may be worth anywhere from 5 billion to 10 billion Euros (5-10x p/e ratio).
In any case, even if Renault's stock price DOUBLED from here, that would still value Renault's business at zero.
An important point here is that out of simplicity (and laziness), I have left out Renault's holdings in Volvo and AvtoVAZ.  Renault used to own 20% of Volvo but now owns only 6.8% which was valued at around 1.7 billion Euros at December 2010.

This is just a quick preliminary look at this idea so I am not confident at all about the future of Renault or even Nissan.
But there does seem to be enough here to merit some further investigation and even maybe a speculative position.  A long/short stub trade may be risky due to the possible volatility of the position (look what happened if you put this trade on earlier).
But as a naked long trade, it would be a play on a recovery in the auto industry, a recovery or some stability in Europe, a normalization in the relationship between the stock prices of Renault and Nissan etc...

I think this is certainly something to look at for people who are already interested in ideas in France/Europe, the auto industry, Nissan etc...  This is a play on all of them at once.
Posted by kk at 4:59 PM