I haven't really followed Nintendo over the years as I really don't like businesses that are dependent on recurring hit products.  That is my reservation with Apple, too, but at least Apple is a bit more broadbased than Nintendo (Nintendo is just a game whereas the Apple has laptops, desktops, phones and iPads that function as e-readers, music/media players etc...  and the eco-system is much wider and deeper than a Nintendo).

But as I was reading something (forget where...), I noticed someone mention that Nintendo is trading at 2.5x p/e.  Well, that got me interested.  Granted, I have to say that Nintendo is a stock that I wouldn't buy even if it was cheap because of the boom/bust nature of the game business (look at how quickly the game console business seems to change over the years.  At one time it was Atari, and then Sega versus Nintendo, and then Sony came out of nowhere and buried Sega, and then Microsoft came out of nowhere and put a dent in the Playstation.  And then the Wii came out and changed the world.  And now it seems like the iPad is a game changer, not to mention social gaming on social networks.  There is no doubt that this is new competition for the old gaming businesses even though they still say that there is no impact from the new up and comers.  But it is still early.

In any case, if you use the Buffett rule and try to see what the industry is going to look like in ten years, then the game console business is one of the first industries that I would say it is impossible to visualize.  I remember people saying that the PC games will catch up in graphics and speed with the game machines, but that never really happened.  I don't think PC games got as big as people thought.  Things like the Wii really kept the game console business going.

On the other hand, the iPad is a different story, I think.  When people sit down to think about what they are going to get their kids for the holidays, I really think things like the iPad become a worthy alternative to game machines.  Should we get a Wii or an iPad?  And for parents, the iPad has tons of games, but even better, it has all those other applications like learning programs, ebooks and other things that they would love to have not to mention the portability of an iPad (versus a game machine plugged into the TV set at home.  Of course, there is the DS and PSP, but I still think the iPad can cut into that market too).

There is a nice presentation at the Nintendo website that shows that the 3-D version of the DS is selling very fast, basically proving the naysayers wrong.  Again, it is early in the game.

I have no real insight into short term trends in the sales of these things.

But anyway, let's take a quick look at this thing. 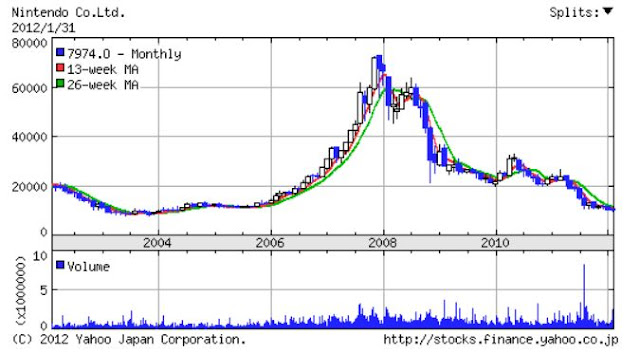 This is kind of nuts.  The stock took off on the release and sales momentum of the Wii, which was released in 2006, and sales really took off in 2007.   EPS in the year ended March of 2008 was 2,012/share, so Nintendo was trading at a whopping 35x current year (at the time) earnings.  The peak EPS came the following year at 2,182/share, so the earnings growth didn't fill in the valuation gap (earnings failed to catch up to the stock price).

Earnings have been trending down ever since, and the stock is now trading at 10,000 yen/share, or down -85% from their peak.

As an aside, this is one of the reasons why I dislike growth stocks, and expensive stocks in general.  It doesn't take much for people to lose a lot of money.

Anyway, let's take a look at some fundamentals going back to 1998:

You can see why Nintendo stock was trading up at 35x p/e.  Using the March 2008 year figures, investors were looking at five year sales growth of  +27%/year and net earnings growth of +30%/year, and EPS growth of 33%/year.  How can you not like the stock?  It had decent returns on equity, tremendous growth, tons of cash and short term investments on the balance sheet.

Of course, the problem is that the Wii was a huge hit.  We know from the history of game console manufacturers that each cycle represents huge risks to these makers.  Some new generations will be hits, others will flop.  It's not the same as, say, Microsoft's upgrade cycle.  They have such a dominance that even if one upgrade flops (Vista), they still have a large base to depend on for future upgrades (the cost of switching is very high).

For game makers, I don't know how 'sticky' users are on next generation.  I'm sure all the manufacturers will have their own tables and charts showing how the current user base will most likely buy the next generation product.  But the math wouldn't work if there wasn't some decay in stickiness due to the increasing alternatives out there (to gaming in general).

ROE
ROE for Nintendo is actually pretty reasonable.  It averages 12% for the 14 years in the above table.  However, this grossly understates the return on their business as much of the net worth of the company is actually invested in cash, deposits and short term investments.   As of March 2011, net assets of the company was around 1.3 trillion yen, but it had 1.2 trillion yen in cash and short term investments.  And those cash and investments don't earn much at all.

If you average it all out (deduct cash and short term investments from shareholders equity, get the average 'real' operational net worth and calculate the 'adjusted' ROE), I think you get something like 250% return on adjusted equity over the past 14 years.

What is the Current Valuation of the Business?
So let's take a look at what the market is valuing Nintendo's operations excluding cash and short term investments.

To update the figures, I looked at the December 2011 figures: Cash and short term investments were 928 billion.  With 128 million shares outstanding, that comes to 7,250/yen per share.  The current stock price is 10,340 yen/share.  So ex-cash/investments, Nintendo is trading at 3,090 yen/share.

Now going back to the above table.  What has Nintendo earned in EPS in the past?  The peak EPS was 2,182 yen per share in the year ended March 2008.  If Nintendo can achieve that again some day, then Nintendo is trading at a p/e ratio of 1.4x p/e!!

Well, I personally don't think that's going to happen.  I think 2008 was really a perfect storm of an incredibly strong global economy with the U.S. economy at the peak of a major housing and overconsumption bubble, and Nintendo rode that like a world champion surfer with their super hit Wii and momentum of DS.

So let's look at a more modest scenario.

On that basis, Nintendo earned an EPS on average of 938 yen/share over the entire 14 years.  So at 3,090/share (net of cash and short term investments), Nintendo is trading at 3.3x this average EPS.

Now this is starting to look really cheap.

Current Year Guidance
Of course, every story has a big "but".  Recently, Nintendo management revised down their estimates for the full year ended March 2012.  Sales are expected to be down 35% or so and they will LOSE money for the full year.   This hasn't happened in the past 14 years (by the way, I chose 14 years to look at because annual reports are available at the Nintendo website only going back that far).

Management likes to blame the economy and the strong yen and seems to minimize the impact of the iPad, social gaming and other alternatives.

I have my doubts about that.  But if they can manage expenses so they don't lose too much money over time even without big hit products, the cash on their balance sheet combined with the cheapness of the stock may make this an interesting 'option' on the future of Nintendo.

Here is their revision in forecast for sales, from the January update: 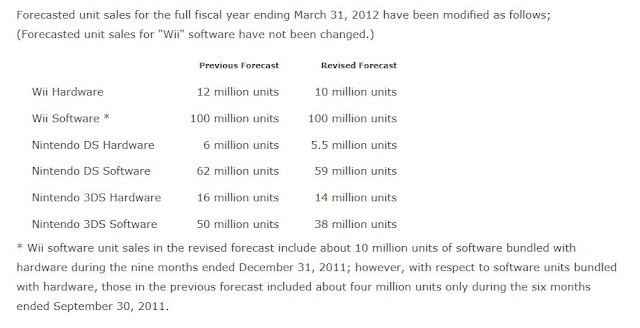 What about the Cash?
Nintendo has paid out dividends over the years as you can see on the table above.  So they are not completely shareholder unfriendly.  However, I find it highly unlikely that this cash will be distributed, or that there would be any sort of leveraged recap or other financial engineering on this stock as that almost never happens in Japanese corporations.

Otherwise, if it is just going to sit there and not generate any returns, then the ROE of the company would have to include all of this excess cash and 'unproductive' asset.

Yes, the cash is a valuation cushion on the stock for sure, but I wouldn't lean too hard on it as many value investors seem to do in Japan (to great frustration).

I think it's safe to see it as a valuation floor, and then whatever comes from a weakening yen, improving global economy and the 3DS really taking off is the optionality.


Conclusion
Nintendo is certainly cheap, and it is cash rich.  There is no risk of Nintendo disappearing any time soon.   However, this company really needs the 3DS to be a hit for this stock to work.   For fans of Nintendo, however, this is not a bad price at all to get in.  It is cheap.

For me, I have to get over the fact that I can't predict the evolution of gaming devices over time, which is going to be a big driver of the stock price in the future.  Will Nintendo still dominate in a world where gaming is getting increasingly diverse (iPads, PC social gaming, Xbox and Playstation integration with other multimedia etc...)?

I have no clue about that.  For those who do, though, this is a great opportunity!

Email ThisBlogThis!Share to TwitterShare to FacebookShare to Pinterest
Labels: 7974, NTDOY