On November 21, Alleghany (Y) and Transatlantic (TRH) announced a merger.  Since I mentioned Y here, I feel obliged to make a comment.   I haven't really ever looked at TRH in detail so I don't know, but assuming that the folks at Y know what they're doing (which has been my contention) then this is probably a pretty good deal.  The folks at Y are super conservative and has created a lot of shareholder value over time and they have a long history of making rational decisions.

The basic idea of this merger is that Y is not only a good manager of insurance, but also are very good capital allocators.  TRH brings to the table a bunch of new 'float' and a global insurance organization.

So combining Y's asset management skills with the scale of TRH's global business has great potential for turning the new company into a really great organization.

Of course, the risk is that TRH has a bunch of underreserved, bad risks in their book.  TRH used to be an AIG company, so obviously this is a risk.

But again, Y has been known to be really conservative and thorough.  If you read their annual reports going back, you will understand that these guys are not trigger-happy at all and are very slow to move and really kick the tires on their investments.

(You can read my original post on Y here)

Anyway, from the Y-TRH merger presentation, here are some basic facts:

Alleghany Creates Value
Here is an updated chart of Y's book value per share and stock price versus the S&P 500 index going back to the year 2000.   They have added value over time very nicely, even with an awful stock market, horrible insurance market and the great recession and all that other stuff.  So Y has grown book value through the 2000-2002 bear market and the recent financial crisis. 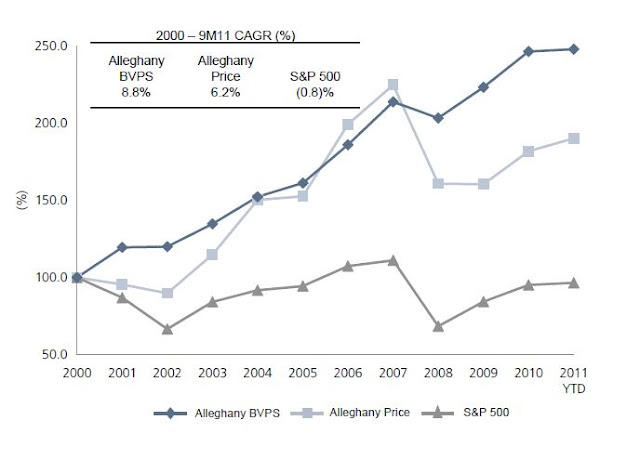 Alleghany is a Good Insurance Underwriter
This is the combined ratio of Alleghany's insurance business compared to peers.  This shows that they are good underwriters and do walk the talk.

Alleghany is a Good Fund Manager
Alleghany has proven to be good equity portfolio managers too.  One of the positives of this deal is that Alleghany will be able to manage the combined float for possibly higher returns than TRH has been able to until now.  Of course, investing in equities is risky, but if Alleghany can keep the equity allocation limited to their shareholders equity or something like that, it should be fine (like Markel and Berkshire Hathaway). 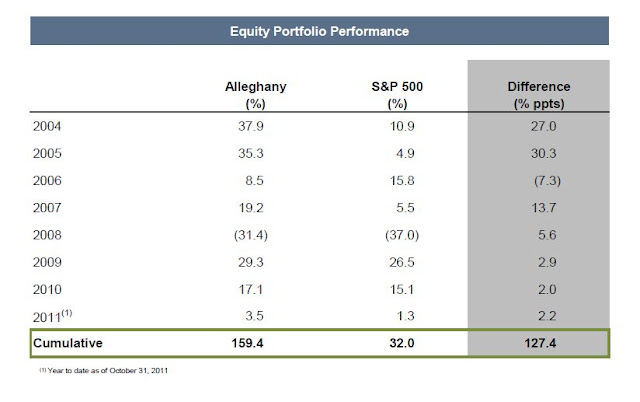 Transatlantic Has Also Grown Value Over Time
Transatlantic, being a former AIG company has some baggage.  They had some serious underreserving problems back in the early 2000s so I have no idea how good their reserves are now.  But again, Alleghany are very good managers and the fact that Joe Brandon is coming on board to run the combined insurance company is a very good thing.  Joe Brandon is highly regarded by Warren Buffett; he ran and turned around Gen Re back in the 2000s until he got caught up in the AIG investigation (which turned up nothing against Brandon). 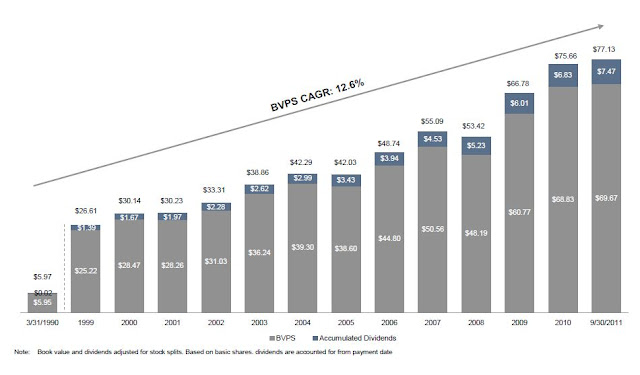 Here is the combined ratio history of TRH since 1999: 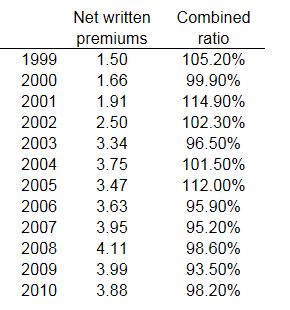 The average combined ratio since 1999 is 101.14%.  The ten year average is 101% and the five year average is 96.3%.  Anything less than 100% means that the insurance company is making money after paying all loss claims and underwriting costs.  A figure above 100% means the underwriting business is losing money.   These figures show a respectable insurance business with the cost of float at around 1% and much better in the recent past despite very large insured catastrophes in the recent past.

Book value per share (including accumulated dividends) in the above table still show growth, from $75.66 as of the end of December 2010 to $77.13/share at the end of September 2011.  They were able to grow BPS even after the huge losses in Japan, New Zealand and Australia.


Quality of Transatlantic's Insurance business?
I don't know and haven't followed TRH over the years, but it's safe to say that Y would not be buying into a crappy or low quality business.  Also, Berkshire Hathaway did make a one-time take-it-or-leave-it bid for TRH in August of this year (offering $54/share) and BRK is not known to buy crappy businesses.

So just on that, we can assume that TRH is a decent quality business.

But more important than that is who is going to run the combined insurance business after the merger.  This may be the most exciting part of this deal.

Who is Joe Brandon?
Joe Brandon was a 'star' manager at Berkshire Hathaway who ran Gen Re from 2001 to 2008 or so.
Here is the float of the various BRK insurance businesses from the 2008 annual report.  You can see that Gen Re had $21 billion in float at the end of 2008 and accounted for a large part of BRK's entire float.  Of course, Ajit Jain is the big insurance star over at BRK (he manages BH Reinsurance) but Brandon handled pretty much a simliar amount in float.

Here is Buffett's comments about Brandon in the 2001 annual report:

Joe Brandon's job was to 'fix' Gen Re, and he did.  Here is Buffett one year later in the 2002 annual report: 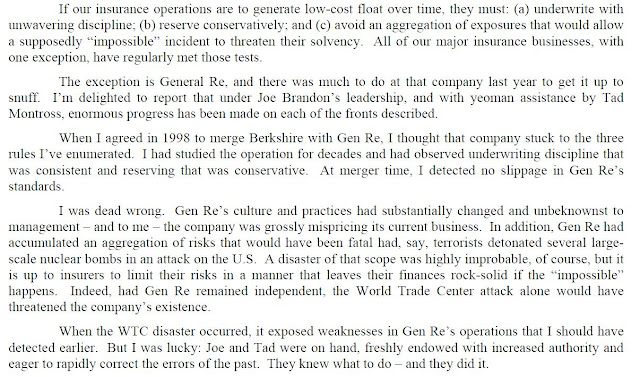 Here is Buffett on Brandon in the 2007 annual report, six years after Brandon took over Gen Re:

And again in 2008 after Brandon stepped down (after pressure from the government):

So as you can see, Brandon was a star at BRK.  Buffett doesn't mention too many people in his annual reports, and not many of them get mentioned so often (OK, he did mention David Sokol very often and that turned out not too well).  Who better to run an insurance operation than someone who did it so well under Buffett?  In that sense, this merger is a great opportunity; an opportunity for investors and for Brandon to get back into the insurance business.

Here is a look at the combined company from the merger presentation: 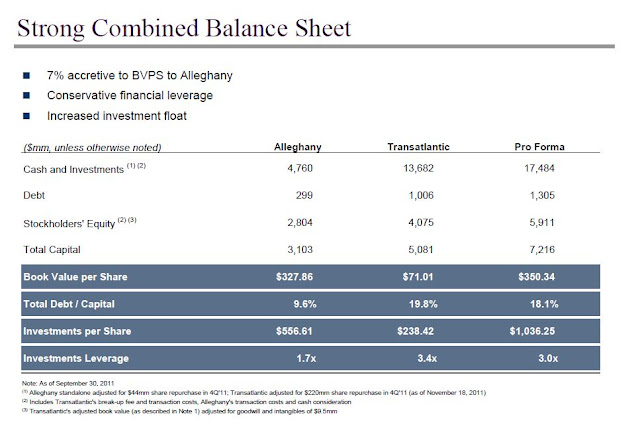 The deal will add 7% to Y's book value per share.  The investment leverage will go up from Y's current conservative 1.7x to 3.0x.  If Y can boost investment returns by increasing allocation to equities (and they will do this conservatively), this can really boost book value per share growth of the combined company.  In other words, the combined Y-TRH will grow faster on a BPS basis than on their own due to Y's investment skill and TRH's float.

They don't break out returns on equity investments, but I assume it's not significant.

What can happen to this return if the combined Y increases equity investments?

We can get a hint of that from Y's 2010 annual report where it shows how equity investments have increased investment returns for Y:

We can see from the above table that owning equities, even during the worst financial crisis added about 2.9% to investment returns versus a fixed income benchmark.

First of all, let's look at the effect of increased investment leverage. From the above proforma table (of combined Y and TRH), we see that Y's current investment leverage (total investments divided by shareholders equity) is 1.7x.   Book value per share (BPS) has grown around 9%/year since 2000 at Y.  Investment leverage has changed over the years, but for simplicity, let's assume that it was around 1.7x (I don't think it was ever that much higher).  If the recent total investment returns were 7.9% (from above table), then we can figure out what BPS growth might have been if investment leverage was 3.0x, which is what it will be post-merger.

All else equal, if investment leverage in the past was 3.0x instead of 1.7x and investment total return was 7.9%, then BPS growth might have been more like 19%/year.   I just added incremental investment gains that come from increased leverage to the 9%/year BPS growth that Y achieved (yes, time periods here are not consistent, but this is just a quick analysis to visualize what might happen to returns going forward).   This was done by simply taking the returns of additional investments as a ratio to shareholders equity:  3.0x - 1.7x = 1.3x, so Y would have 1.3x shareholders equity in incremental returns.  That would lead to 1.3 x 7.9% = 10.3%.  This is incremental to the 9% BPS growth that Y actually achieved, so add that back for a total BPS growth of 19%.

In other words, in this simple scenario, if Y had investment leverage of 3.0x instead of 1.7x, BPS growth might have been 19%/year instead of 9%/year.  (There are a whole lot of other issues here not addressed so this, again, is a very rough approximation).

Again, this is very, very rough, but if we assume that TRH earned the benchmark fixed income index return of say, 5%, then Y's management might have added 2.9% to that investment return by holding more in equities.

So instead of the 12%-like increase in BPS for TRH over the years (again, from the above BPS growth chart of TRH), Y's improvement in investment returns might have made that more like 22%/year.

Of course, this is a very simple analysis and things won't work out so straightforwardly.

From that point of view, there is plenty of room for the combined Y-TRH to increase equity investments to even above the current level of Y.

Knowing and understanding the superconservatisim of Y's management, I don't think that will happen very quickly.  Also, if you read the annual reports of Y over the past few years, you will know that they are pretty bearish on the world economy and markets.

But in any case, from the simple analysis here, I think it's safe to say that the merger between Y and TRH may add 10% to BPS growth of the combined entity just from the combination of increased investment returns and investment leverage.  This doesn't even begin to take into account any improvement in the insurance business itself, which may be a big story here.


Conclusion
So what do we have here?   It looks like a pretty darn good deal when you look at it the way I've looked at it above. You have:
Thinking about it this way makes the Y-TRH merger sound like a great idea and either Y or TRH great investments.

You can get into Y via TRH; instead of buying Y, you can buy TRH here and you will get Y shares when this deal closes.

Merger-arb Trade
The deal is expected to close in the first quarter of 2012, so that's less than four months from now at most (if the deal actually closes).

If you own TRH now, the deal would be worth at current prices:

So by buying TRH shares now versus Y, you will have a 7.4% added annualized bonus due to the merger discount plus whatever dividend TRH pays out until then.