What is happening at Olympus is really sad.  The worst part of it is that I'm not even that surprised.  I have been looking to invest in Japan for a long, long time and have only found 'trades' to do there; buying stocks when they are very cheap due to short term worries about this or that.

But I haven't been able to find good, solid blue chips to invest in or interesting vehicles like Berkshire Hathaway, Leucadia or Loews type thing where you don't really care about the industry but trust the capital allocation skills of management.

This really illustrates one of the biggest problems in Japan; lack of transparency, total disregard for shareholders, outright dishonesty at the very top (which is not unusual in the U.S. either) which just seems culturally acceptable over there.  I guess part of it is due to the lack of due legal process.  In the U.S., people lie too, but they get sued or go to jail (OK, OK, I hear the protests about how few bankers have gone to jail...  Yes, yes, Fuld was a liar as were a bunch of others and they remain on the loose.  But still...).  I don't think that happens very often in Japan.

Anyway, let's take a quick look at this thing.  What is shocking to me is that despite the stock price being down 90% from their highs, the stock is not even super cheap.  It's cheap to be sure, but not ridiculously so.   Again, this goes to show how overvalued Japan has been even recently despite a 20 year bear market. 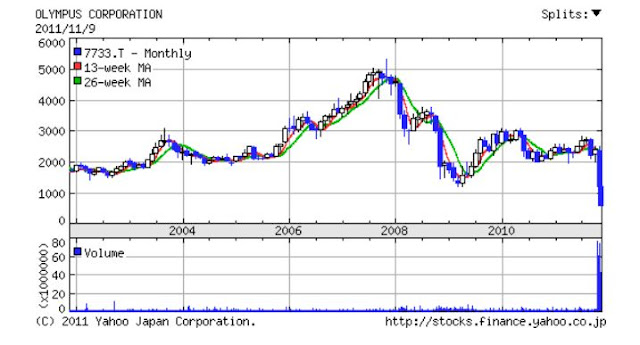 I haven't looked at the reports in 2007, 2008, but these were years at the height of the bubble so these earnings may or may not be repeatable. 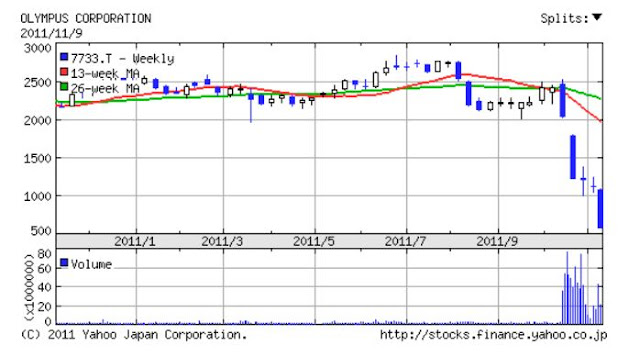 Here is a close-up look at Olympus.  The stock crashed over the past few days from over 2,000 yen/share to the current 584 yen per share.

Is that cheap?  Since so many people talk about book value per share with respect to Japanese stocks, let's take a look at that.  According to the quarterly filing (in Japan), Olympus had 151 billion yen in shareholders' equity and 266.9 million shares outstanding (net of treasury stock), so that comes to a book value per share of 565 yen per share.  So even after this stunning drop in stock price, Olympus is now trading at only a slight discount to BPS.

Here are some fundamental figures for Olympus: 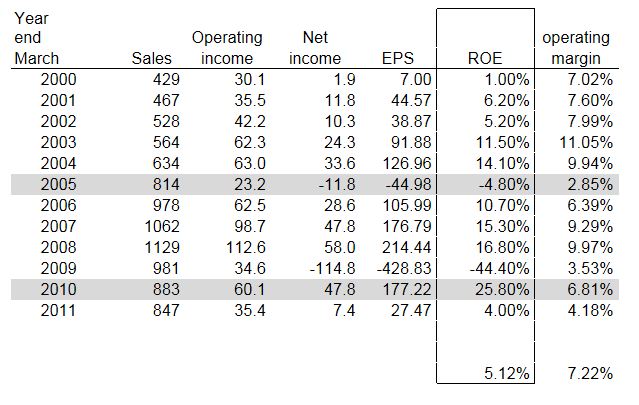 If Olympus earned decent returns on equity (ROE) over time, BPS would be a great buy.  But it looks like over time, the ROE of Olympus has been around 5.12%, not so exciting.  This does include the -44.4% loss in 2009, but since that is a real loss from a writedown, I would not exclude that.  The 25.8% ROE in 2010 is mostly due to a gain booked as a result of transferring a business so it's not operational.

Sales has been declining every year since 2008 and margins haven't been that exciting looking.

It is interesting to note that while Olympus is known for their cameras, the Imaging business accounts for only 15% of sales and hasn't made money recently at all.  The Medical Products business (70% market share of endoscopes etc...) has been the money earner here, accounting for more than 100% of the operating income at Olympus last year.

Since this is the crown jewel of Olympus, let's take a quick look at it: 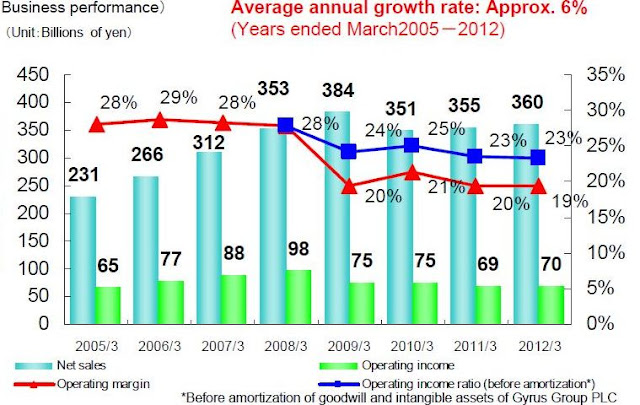 Sales have been flattish over the past couple of years and operating margins seem to be trending down.    I don't have a lot of understanding of this industry and the outlook for this segment, but it does look like a decent business with decent margins, although it is trending down.

Growth?  Management says that growth will come from Asia, and that may be so.  Who knows.  Many Japanese companies have been talking about Asia as their engine of growth for many years without too much to show for it so we'll see.

If Olympus does get back to historical earnings that it earned back in 2007, 2008, then Olympus stock is certainly cheap.   Peak EPS was 214 yen and the stock is now trading at 584 yen/share so that's only 2.7x peak earnings.  I am a bit skeptical that earnings can get back up there.

So let's take a look at the balance sheet.   As of the end of June, 2011 there was 151 billion yen in shareholders' equity and 59 billion yen in investment securities, much of it in equities.  Yet another problem with Japanese business is their continuing of cross-holding of stocks.  Twenty years later, a lot of corporate balance sheets are still stuffed with stocks.  This is very annoying, but is another topic altogether.

EBITDA of Olympus in the last three years were 108 billion, 130 billion and 96 billion yen for an average of 111 billion yen or so.

Using the enterprise value with cash and cash equivalents excluded would give a valuation of around 4.7x EV/EBITDA and excluding stockholdings, it would come to 4.2x EV/EBITDA.  Out of conservatism and the reality that these corporations may never sell their crossholdings, it's better to use 4.7x EV/EBITDA.

I don't know much about the medical systems business, but here's a quick look at some comparables (which admittedly don't look too comparable, actually).

Just as a quick sanity check, I picked some medical device-like companies:

All of these are for the last 12 months and are pulled from Yahoo Finance.

Maybe one should only look at the medical systems segment and see what it is worth since it does earn a 20-23% operating margin.  If that can be valued at 8.0x EV/EBITDA, then maybe we have a good sum-of-the-parts story here (even though betting on a corporate action in Japan is a loser's game; a value realizing transaction will never happen over there!!).

This is a really simplistic sum-of-the-parts, but here goes.

Let's put a 8.0x EV/EBITDA multiple on the medical systems segment of Olympus, add the cash and stockholdings value, deduct the long term debt for the 'equity' value and divide by the number of shares to see what this thing is worth assuming the rest of the businesses are worth exactly ZERO.

In the year-ended March, 2011, the medical systems segment had the following EBITDA:

The operating margin of this segment was a slightly less than 20%, so let's use an EV/EBITDA ratio of 8.0x to value this business and then add the rest of the stuff and deduct the long term debt:

With the above assumptions, Olympus shares are worth at least 1,719 yen per share.
However, this valuation may not necessarily be reached.  My opinion is that if the firm as a whole does not start to earn reasonable operating margins and returns on equity, then this hypothetical valuation may never happen (even though Olympus stock did seem to trade above this level for most of the recent past).

In order for this valuation to be forcibly realized, the medical systems group would have to be sold at this level of 8x EV/EBITDA or something like that, and as I said, in Japan these value realization events rarely happen as many foreign investors in Japan has learned over the past twenty years.

Also, it is not clear what the future of the other segments are.  Japanese companies tend to pump money into even losing segments out of inertia or pride.  This can be a very serious value destroying thing to do.  Japanese companies do  tend to overemphasize market share and sales growth more than return on capital.

Of course, the biggest problem here is the big question mark of the current scandal.  What actually is going on?  Are the earnings/balance sheet figures even reliable?  What do they mean?  What is the future of Olympus?

These are very hard questions to be sure.

I don't own any Olympus and don't plan on buying any in the near future as I am skeptical that things will be 'righted' soon, but I will keep an eye on it and may post some updates if I see anything interesting.

Having said all that, this is not to say that the stock can't go up.   It is certainly possible that value investors see value here and jump in, pushing the price back up dramatically.    Just because I am not interested doesn't mean it won't go up (in fact, the fact that I'm not interested means it will probably go up).

But although I see some value on a look-through or sum-of-the-parts basis as described above, my experience watching Japanese companies makes me worry that future management will continue to destroy shareholder value, even with a nice, profitable jewel of a business.  I fear that instead of realizing value for shareholders via a spin-off or sale, or by shutting down unprofitable or low profit segments, they will continue to take money from the good business and dump it into the bad to preserve or increase sales, and more importantly, I think, maintain employment.

Dumping good money into bad businesses seems to be at least partially motivated by Japanese management's aversion to right-sizing/layoffs.  They would rather spend money on a low profit factory to update it with subpar returns on investment rather than close it down and have to lay off workers.

Anyway, I don't know that this is what Olympus has been doing in the past, but their capital management in the past hasn't been very encouraging either way.  Also, even though there seems to be a lot of cash on the balance sheet, this may not go back to shareholders any time soon (it's not net cash anyway).  Just skimming the annual reports going back a few years, they seem to be hell bent on growth.

And one way they want to grow is through acquisitions.  And keep following that thought, Japanese corporations have historically been horrible in acquisitions.  That's partly because of their reputation to pay too high a price (which is no surprise given the history of managements' obsession with sales and disregard of returns on capital), and their reputation for not being able to manage the businesses they buy.

In any case, that's just a quick look at this thing for now.  I will keep thinking about this for a little bit.

Email ThisBlogThis!Share to TwitterShare to FacebookShare to Pinterest
Labels: Olympus