Having browsed some of the conference presentations from the Value Investor Congress, I noticed that Leon Cooperman of Omega Advisors likes KKR at 5x p/e ratio.

That's interesting because I too happen to be looking at some of the private equity houses (I recently posted about Blackstone).  I did spend some time with the financials of KKR and I look forward to their earnings and conference call that will happen tommorow,  I think.

Having said that, I do still have one main concern with all of these private equity shops, and it is their size.  KKR too, is the same.  They have built their track record and reputation since the late 1970s.  And they have grown their asset base substantially only recently.

This is their assets under management (AUM) from their 2010 annual report. 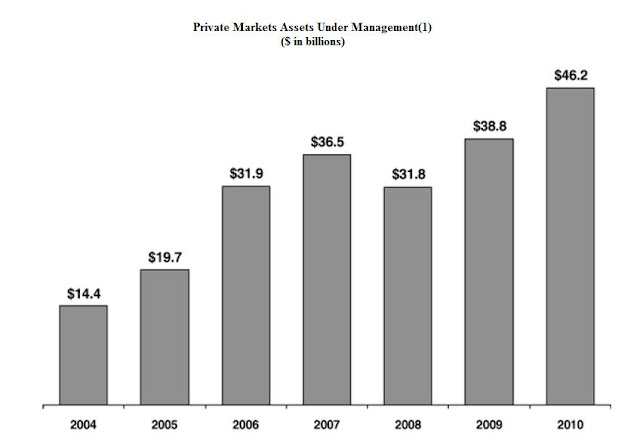 That is pretty huge.  Don't forget, private equity uses leverage so their buying power is much bigger than the $46 billion shown here.  Remember when $20 billion LBO was huge?  Well, they would need to do a few of those to deploy this kind of capital.

Anyway, let's see if size really matters.  Here's a look at the IRR (internal rate of return) of KKR's funds historical by vintage (private equity funds raise capital for funds with a fixed time period and are not open-ended investment vehicles like hedge funds or other investment funds; they have to return capital to investors after seven or however many years).

In fact, all of the IRR's above 30% occured in funds raised before 1987.  Since then, returns are pretty decent, but not the 30%+ returns private equity funds have grown to be known for.

Current funds ("Included Funds" in the table) are not doing badly at all, but it's hard to not notice that the gigantic $17.6 billion fund has only returned 6.6%/year and it's been five years already.  Yes, it's been a pretty rough five years.  But still.

As these funds get bigger, the potential number of targets get smaller.  This is an inescapable fact.  Also, other megafunds will be fighting over the same pool of big deals.

Here's a table from their presentation in September 2011 that shows the performance of their funds during rolling three-year periods: 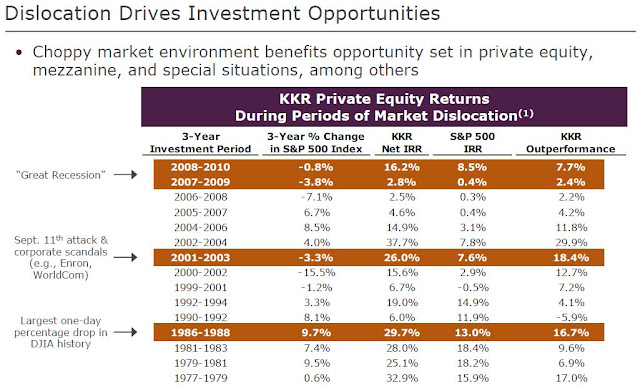 It really does show the good returns even in volatile market periods which explains the popularity of these funds these days.  Much of the tremendous growth in AUM at all of these companies are driven by this factor in these 'alternative' investments.  My concern is pretty much that this rush of assets into these funds will ruin them (or at least cause much lower returns going forward due to size).

A quick look does show that their really great returns happened in the 1977-1988 period.  The returns there are fantastic.  Returns since then are not so bad either, of course, especially in relation to the S&P 500 index.

But again, they now have $50 billion in AUM, not the smaller amounts they managed for most of their history.

In any case, let's still take a quick look at KKR. Is it cheap? What is it worth?

Both Fortress Investment Group and KKR in their presentations show a sum-of-the-parts analysis to show that the stock price for their business is way too cheap.

Here's a slide from a KKR presentation in September, 2011: 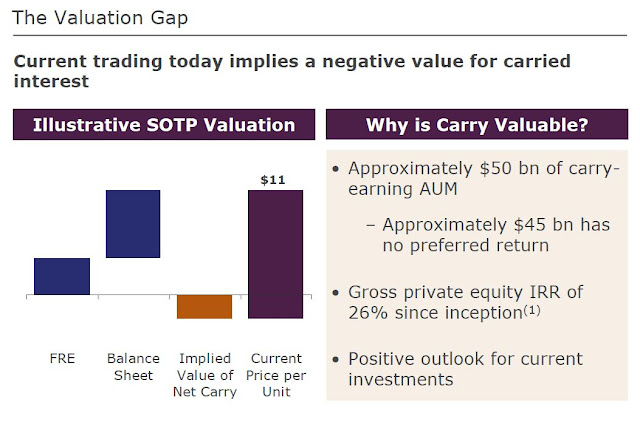 The idea is that KKR is worth the sum of three pieces:  The FRE, which is the Fee-related earnings (this is the management fees on all of their AUM, and incentive fees on their non-private equity funds.  Private equity fund incentive fee is called carried interest and is another piece of the valuation puzzle I will mention later).

The fee-related income is the most stable piece of the valuation.  It's a fee they earn no matter what, as long as they retain AUM.

In the Fortress Investment Group presentation, they use a multiple of 13x fee-related earnings to value this part of the business.  I think 13x seems fair but not necessarily conservative, especially if this is a pre-tax figure.

The second piece of the valuation is the "balance sheet".  KKR does own $5 billion+ worth of interests in their own funds and co-investments in private equity deals.  This is recorded in the Capital markets and investments segment of the business.  I think the book value of that portion of the business is used here.  Unfortunately, the above slide doesn't include figures and details and what the actual values in the chart shows.

Here's a slide from that presentation that shows the carried interest income over the past few years at KKR: 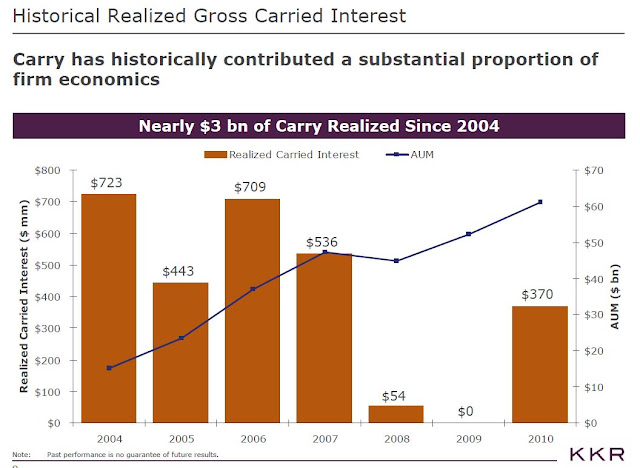 This is certainly non-trivial, and it is a large part of the business.  Why do people start hedge funds and private equity funds?  Because of incentive fees and carried interest, of course!

So you can't value a business by putting no value on that.  And that is what the market is apparently doing with KKR according to these charts.

Since they don't give full details on their "sum-of-the-parts" slide, I will put some numbers in there myself with my own conservative assumptions, not what Wall Street typically uses.

So for capitalizing fee-related income, which I take to be largely pretax (because KKR is a partnership that gives you a K-1 form to file), I will use a 10x multiple.  That seems fair, a 10% pretax yield.   AUM can go up and down, depending on the times.  I'm sure KKR would argue that's way too cheap.

Anyway, so part one is that the economic net income that is fee-related in the first half of 2011 was $202 million.  Annualize that and it comes to $404 million.  Put a 10x multiple on that and that comes to $4 billion (OK, I rounded).

The publicly traded shares of KKR owns 30% of the whole business, so the KKR shareholders stake in that income would be $1.2 billion.  With 205 million KKR partnership units outstanding (for the public shareholders portion), that comes to $5.85/share.

So what is the carried interest worth?  That's the tricky part.  This is obviously a function of how well the private equity funds perform over the next few years.

They have $50 billion or so in private equity assets (fees and income from other AUM is included in fee-related income capitalized above).

Add this to the above other two parts and you get $31.70/share in value for KKR.   I personally think that's a bit optimistic, so let's look at what happens if the funds return +15% and +10%.

The carried interest per share and value per share of KKR at the various IRR levels would be:

So if you assume that KKR's private equity funds generate a 10%/year return, KKR is worth $22.37/share.

Combine that with the $13.70 for the rest of the business, that comes to $19.55/share fair value of KKR.  This approach may show a lower fair value than the previous analysis assuming various IRR, but it's conservative in that it doesn't assume any specific return.

KKR stock does, in fact, look cheap on this basis and with these assumptions.

I will take another look at this and Fortress Investment Group when they announce 3Q earnings, but for now, these are the figures I get for KKR.

Again, the assumption for the value is simply the sum of three parts:  The fee-related income, the investments on their balance sheets (capital markets and principle activities), and the carried interest.

The valuation was done, all pretax, using a 10x multiple, or a 10% pretax yield, which seems fair as a first pass sanity check.

I don't own any of the private equity or hedge funds, mostly due to my concern with their increasing size (and my skepticism regarding their future returns), their complexity (headache reading their financials), their partnership structure (I get an allergic reaction when someone sends me things like a K-1 form, and they always come late so you have to file for an extension), the risks inherent in this type of business, especially when they are looking to grow, expand and diversify, and my preference for other cheap financials (like Goldman Sachs).

This is not to say that these things can't perform well going forward.  They are certainly out of favor at the moment, that's for sure.

Keep in mind, as usual, that this too is a financial stock and financials tend to be pro-cyclical and risky.  Private equity funds use a lot of leverage to due big buyouts so an extended recession, bad capital markets can really hurt these companies.  This is not one of those businesses that you can just put in your portfolio and forget about like, say, Coca-Cola or Berkshire Hathaway.


As usual, do your own work!

Email ThisBlogThis!Share to TwitterShare to FacebookShare to Pinterest
Labels: KKR