Fairfax Financial Holdings is yet another financial company (insurance) that is run by an incredible manager that has done really well over the years.  I know, I know. This is getting boring.  Just talking about well-run financial institutions trading at book value is not interesting or exciting at all.  I'd rather write about some interesting special situation with more analysis involved.

But I can't not mention stuff that looks interesting just because the bottom line is not that exciting: another financial trading at book value.

Anyway, there is actually an interesting angle to this one that is more than just another cheap financial.

But first, a little background (but only a little).  Fairfax Financial Holdings is basically an insurance holding company that runs so-so insurance companies but grows through astute acquisitions and unconventional management of 'float' (in the case of Berkshire Hathaway, they manage top quality insurance business with top notch investing results).

Fairfax Holdings is run by Prem Watsa and his letter to shareholders are well worth reading going all the way back. (I really have to set up a link page or post on these "must reads").

Anyway, Fairfax was started 25 years ago and since then the growth in book value per share has been +25%/year.  This is astounding, of course.  It's right up there with Berkshire Hathaway, Leucadia and very few others (actually better).

Here is the history of their book value growth: 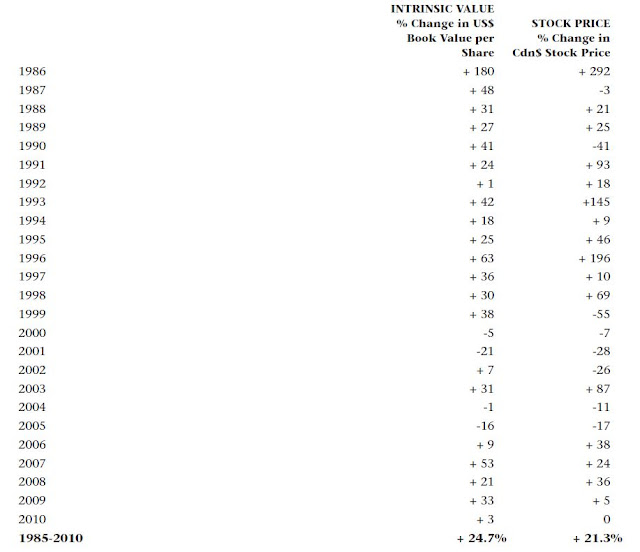 You can see, though, that most of the great growth occured in the early years as is often the case with these companies.

Here are the growth in book values over various time periods through December 2010:

Their returns since 2000 hasn't been that bad at all either, despite a flat stock market. We will see what earned those returns later.

Watsa is known as a very good equity value manager.  Their bond returns are also pretty good.  From the 2010 annual report:

The interesting thing about Fairfax is that unlike Buffett and other value investors, they do actively hedge their equity exposure by using swaps and futures contracts.  I think they have been 100% hedged on their equity holdings in the recent past (meaning that although they own stocks, they are short a like amount so they will not get hurt in a declining market).

Even with stock market hedging (or maybe because of it, even though most people will hurt their performance by trying to hedge), they have earned very good returns in their equity portfolio, gaining +14.2%/year in the past five years versus only 2.3% for the S&P 500 index.

This is slightly different than what David Einhorn does at Greenlight Re; they run an active long/short fund.  It is simliar, though, in that they are not fully exposed to stock market volatility.

Just for the record, here is their large equity holdings which doesn't change all that often. It's always good to see what people with great track records own right now:

How are they as an insurance company?

Here is the long term performance of their insurance business:

Berkshire Hathaway, I think, has a cost of float of around zero over the years.  Fairfax, though, loses around 2.3% per year over time on their insurance businesses. This is what you can call the cost of float.  If you can get investment returns that exceed your cost of float, then you are making a profit.

This is why Fairfax compares their long term cost of float with long term bond yields (which is a risk free cost of capital indicator).  The fact that their cost of float is less than the Canadian government bond yield means that the insurance business is in fact adding value despite underwriting losses over time.

So what's the big, interesting bet?

Below is a table they included in the 2008 annual report to illustrate this:

They lost money from 2003-2006 in these credit default swaps and equity hedges, but when the sh*t hit the fan, they paid off in a big way. (A credit default swap is a contract that pays out when there is a default on a debt; sort of like an insurance contract on credit; Fairfax bet heavily that there would be a lot of defaults)

Now, I have to say that I don't like insurance companies generally making big bets like this.  An insurance company shouldn't be acting like a hedge fund. But what is interesting here is that they weren't really taking huge directional risk as I think they were paying very little for some of these hedges, especially the credit default swaps which we now know was grossly mispriced.

As long as they don't spend too much capital or take too much risk, it's OK for them to take these asymmetric risk/return bets.  They weren't going to go out of business if their bets didn't pan out.  This is not how the bets were structured.

Also, it's important to remember that Fairfax put on these bets long before Michael Burry became a hero of sorts, and John Paulson's hedge fund made billions shorting subprime loans CDOs.  A lot of hedge funds and others, it seems to me, is rushing into these 'black swan'-type trades and I think a lot of that is driven by Burry/Paulson envy; they all want to find that next big trade.

However, Fairfax was looking for and found this before it has become trendy lately.

Anyway, enough of that.

Much of the world seems to be betting on inflation; gold and other commodities are through the roof as continuing easy money from global central banks is seen as inevitable.  They see inflation as inevitable.  Ironically, this is happening at the same time as everyone seems to be rushing into U.S. treasuries in a flight to safety.

Here's the trade:  Fairfax Financial has put on a huge short trade on the CPI (Consumer Price Index).

If the U.S. / world follows the pattern of a Japan-like balance sheet recession, then the CPI can go down by 14% over ten years.  This is Watsa's analysis of Japan and the U.S. in the 1930s.

This is not news, actually.  Fairfax put on this trade in 2010 and mentioned it in the 2010 annual report.  But as of the end of December 2010, this trade had a notional value of $34 billion, but as of the end of September 30, 2011, that has increased to $47.4 billion.  The weighted average maturity of these contracts is 8.9 years.   (This trade was set up by entering into an agreement with counterparties (presumably large, global investment banks) whereby Fairfax pays a premium up front and the bank has to pay Fairfax the amount of deflation over the next ten years (if the CPI goes down 10% in ten years, banks will pay Fairfax $47 billion x 10% = $4.7 billion)

So, if Watsa is correct and there is 10-14% deflation over the next ten years, this trade can potentially make $4.7 billion - $6.6 billion!  That's a huge win if that happens.  If there is no deflation, then they lose $430 million or so.  In a sense, the market is only giving a 7-10% chance of Japan-like deflation occuring.  If you believe there is a greater chance than that, then this can be a homerun.

The beauty of this trade is that the upside potential is huge but the downside is limited to the initial payout of 0.9% of the notional amount.

Also, the shareholders equity of Fairfax Financial was $8.2 billion so you can see how big a trade this is, even though, again, the risk is limited to around 5% or so of Fairfax Financial's net worth.  This is a trade that isn't going to blow up Fairfax if it doesn't turn out well.  This is not the same as, say, buying tons of European soveriegn debt, CDO (collateralized debt obligations) or CMBS (commercial mortgage-backed securities) on leverage.

I am usually not a big fan of these big bets; when money managers veer away from what they know and have become good at, things often don't work out.  There are countless managers who started out as great stockpickers but got distracted into macro-investing and went on to lose boatloads of money.

But some of these bets seem to be low risk situations.  Another example is David Einhorn at Greenlight who bought a ton of default swaps on Japanese government debt.  I find it highly unlikely that Japan would actually default since they can just print money to repay yen-denominated government debt, but the beauty of the trade is that the market also is not pricing in much of a possibility.  Which means that it is or was a very cheap trade to put on.   Seth Klarman has bought out-of-the-money long dated puts on U.S. treasuries at low prices as he sees higher long term interest rates as a result of all this pump priming as inevitable.   All of these are low cost trades that won't hurt them if things don't pan out.

Yes, this sort of smells like a little bit of Burry envy; trying to find that next big, black swan, outlier trade where the market is not pricing in a certain scenario.  But again, Watsa has already done this before with the credit default swaps.

As long as not much capital is burned in the trade, I suppose it's not such a bad thing (although I would still prefer these guys to focus more on their stock analysis skills!).

Fairfax Financial has done really well over time and has done well recently too.  Their insurance operations tend not to be the best, but that's the game plan; Watsa seems to like to buy not-so-great businesses on the cheap and then try to fix them up.

Their investments have done really well too, but what might bother some people is Watsa's active hedging and unconventional bets.  It sort of makes me scratch my head too, but he has been successful with it, and it doesn't look like he does anything 'reckless' with big downside exposure.

Most people who try to hedge their stocks using futures tend not to do too well and most of the time, it's better to simply reduce equity holdings to lower risk than to adjust using futures, but again, Watsa had done well with this.

This deflation trade is certainly a big one, but it has the potential to earn a huge amount of money and if it's wrong, the cost is minimal; at 5% of net worth, that comes out to only 0.5%/year expense.

Fairfax, with this sort of performance history is certainly interesting at around book value.

Their equity holdings are 100% hedged out, so Fairfax doesn't have much market exposure.

This may appeal to those with a bearish view on U.S. and global economy and markets and believe there is a good chance of a Japan-like deflation.

It's also not at all a bad idea for those that are not necessarily bearish.

Of course, at book value or modest premium, I would tend to prefer Berkshire Hathaway.

Anyway, as usual, this is just another idea.  It is a financial so is subject to all sorts of risks of other financials and insurance companies.  Also, you have to take into consideration counterparty risk: who exactly are the counterparties to the CPI deflation trade?  If we do go down the path of Japan or 1930s in the U.S., will the investment bank counterparties still be around to pay off the bet?

As with any financials, there's a whole bunch of risks, so one should really get to know the company and get comfortable with it before buying into it.

And again, as I keep saying, I do keep talking about financials, but that doesn't mean one should have a whole bunch of financials in their portfolio.  Portfolios shouldn't be overly diversified (with many different stocks), but they shouldn't be overly concentrated in any single industry/sector either.

Email ThisBlogThis!Share to TwitterShare to FacebookShare to Pinterest
Labels: FRFHF