The title is meant to be sung in the melody of the Sound of Music song, "Maria".

Nomura just announced a loss for the first half of fiscal 2012 and a major restructuring.  I guess the Lehman purchase isn't really working out.  I have to say that this was actually not a bad idea, to buy a business from a failing company at the bottom of a cycle.

My only concern, however, is that these Japanese financial companies, for whatever reason, have failed so far in overseas ventures for the most part.  They have tried to build up the U.S. business numerous times over the years and it always seemed to end in tears.  In the early 1990s, they did really well in the commercial mortgages market until they blew up.  In the late 90s they again built up the U.S. business only to have it fall apart after the 1999/2000 peak again.

They have been rapidly expanding in the U.S. again since the crisis.  We have yet to see if this is going to work out over time.

Anyway, Nomura is an interesting situation for many reasons.  One of them is that it sort of illustrates what has been wrong with the Japanese equity market.  Below is the stock price and book value per share of Nomura (in Japanese yen) since 2000. 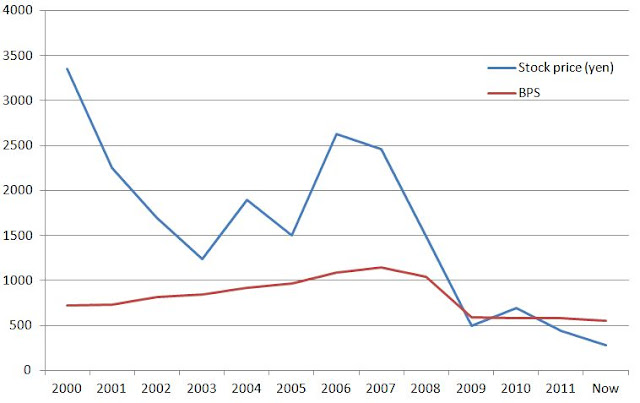 You will notice that despite the bad economy over there and stock market, Nomura has been trading way above book value for most of that time.

Here is the P/B ratio over this time period: 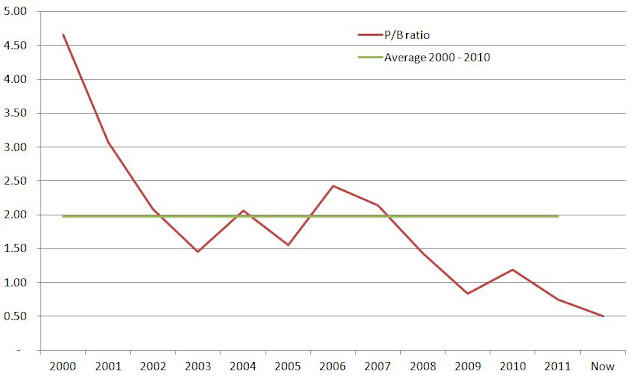 In 2000, it was trading at over 4.5x book value.  Even after the internet bubble popped, Nomura traded at arouind 2x book until the financial crisis in 2008.

Of course, many U.S. financials traded at way over book value too in the 2000s until the financial crisis hit.  But at least they were earning some decent returns on capital, even though it turns out that in some cases those returns weren't 'real' (they gave it back and then some in the 2008/2009 collapse).

Let's look at the fundmantals of Nomura over this time period. 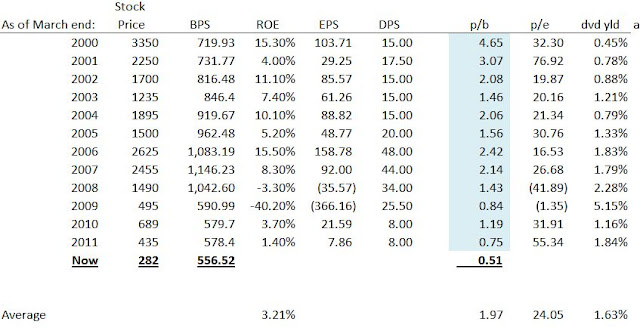 This is the data pulled from Nomura's 20-F filings (so are U.S. GAAP based) of the basic fundamental figures.

In the past ten years, they have earned a return on equity (ROE) of only 3.2%.  Of course, this includes their 40% loss in 2009 due to all sorts of problems.  This is when many Japanese institutions were feeling good about not owning subprime mortgages.  Well, some of these (Nomura) still had to take huge writedowns on private equity holdings and other disasters.

If you exclude that as a fluke (better not to, but let's be generous for a moment), their ROE would still be only 7% or so.    From 2000 up until 2007, the ROE was 9.6%, which is reasonable for a Japanese company and I think close to management's goal of earning 10% ROE over time.

Is this cheap?  Look at the above table and see the ROE, p/b ratio and p/e ratios since 2000 through 2010.  I think this is one reason why the Japanese stock market has been such a horrible performer.
Despite awful conditions, the stock market really never got cheap.

This is a big contrast to the U.S., where companies like GS and JPM, as I stated before, are trading at or below tangible book value so soon after the crisis begun.  It has taken the stock market in Japan 20 years to take the stock price of Nomura to below book value.   Twenty years!

And it took a financial crisis that cut the book value per share of Nomura almost in half to take the p/b ratio down to book value, and another semi-crisis to take it down to where it is now at 50% of BPS.

Of course, the next question is if that is cheap.  If Nomura does succeed in realigning the business and starts to generate 10% ROE over time, Then Nomura is certainly worth book value or more.

However, what is worrisome is that they are attempting to expand their business globally; something they haven't been able to do successfully in the past.

Also the 9.6% ROE they earned in the period 2000-2007 seems decent, but with the giant loss they incurred in 2008 (year-ended March 2009), it seems the 9.6% ROE may have been achieved with excessive risk.  Of course, it can be excess risk or simply poor risk management.  It doesn't matter which one it is because either way the end result is the same for shareholders.

So it is a good question whether Nomura can achieve a 10% ROE going forward.

Why am I doubtful of Nomura success overseas?  The people in power tend to be highly educated and intelligent, but they operate in a country that is highly regulated with excessive protection for domestic companies.  This may be good for the domestic businesses, but this is bad for development of the industry itself.

This has worked well for manufacturers (where a protected domestic market allowed auto companies to reinvest and improve quality etc...), but this has not been good for the financial industry.

Nomura has been recommended on and off over the years by many people, but mostly as a play on a comeback in the Japanese stock market, the one market with the longest bear market and often gets categorized as the least popular major market.

If Japan does enter a bull market, Nomura will certainly benefit as they do have a very strong franchise domestically.  Their domestic business is very good, there is no doubt about that.

The table below shows the large growth in number of employees and shows that most of this growth has come outside Japan (from the 2011 annual report):

The total number of employees has grown 60%, or 10,000 employees since 2007 (which was a peak in the global economy).   Of that, around two thousand were in Japan, so 80% of the employee headcount growth has come from overseas.  This is a huge bet.

The following shows the number of companies in the global research coverage which show that Nomura is serious about global expansion: 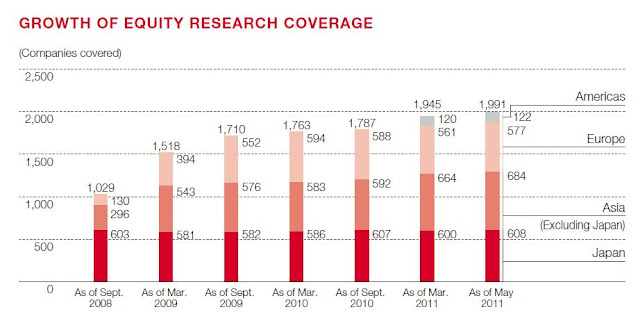 Maintaining research coverage is very expensive.  This growth in the fixed cost base must be accompanied by growth in revenues, or else large losses will result.  Operating leverage works both ways when you increase your fixed cost base, so it may increase earnings volatility too, especially when you are not the dominant player.  In the investment banking business, only the top tier players tend to make money.  We will see if Nomura can break into that.  What looks like a good move to diversify away from the domestic business can actually become a nightmare if revenues don't pick up.

But let's look at how Nomura has done internationally.  Thanks to the SEC required 20-F, regional revenues and pretax income must be reported.   Here are the historical figures going back to the year 2000.  They are the pretax income figures by region: What this table shows is staggering.  I grabbed these numbers from the various 20F's from the last ten years; sometimes earnings are reallocated and changed depending on which 20F you looked at but I didn't 'fix' any of that as they were small and didn't change the conclusion or message of this table (for example, the 2008 income before tax for a region may differ on the 2008 20-F and then later on the 2010 20F (as they show figures for the past three years)).

Since 2000, Nomura has lost 854 billion yen in their non-Japan business.  Yes, the 2008 and 2009 financial crisis accounts for much of that.  But even before the crisis, you will notice that Nomura has lost money in almost every single year.

On the other hand, Nomura has made money in their domestic business in just about every year despite the long bear market, or at the very least non-bull market in the Japanese stock market.

Even the Asia business didn't do too well even though there was a big boom in Asia during most of this period.  How can say you are getting involved in Asia and not make money in a booming economy?

There was a tremendous global boom between 2002-2007 or so, and yet their overseas business didn't make any money even in those "boom" years.  This is truly baffling.  How can this be?  Poor management?

I tend to think that Nomura stock would be much more valuable if they just simply dropped their global plans.  Obviously, they would have been better off in the past ten years, at least.

So what is the domestic business worth?

Just for fun, since Nomura will not drop their global plan for various reasons (even though every few years, they do tend to de-emphasize it only to try to reenter at another later date.  Even in the best days of Nomura in the 80s, they failed to make any headway as a global investment bank), let's look at what the domestic operations is worth.

The domestic business earned an average of around 200 billion yen per year.  Using a 40% tax rate, you get 120 billion in net income.   With 3.7 billion shares outstanding, that comes to around 32 yen per share.  At 10x, Nomura's domestic business is worth 320 yen/share.

In a more normal market, it looks like Nomura's domestic business can earn 300-400 billion yen pretax.  Let's say 300 billion.  Doing the above exercise gets you to 486 yen per share, which is higher than the current 290 yen per share it is trading at now.  So all that needs to be done is for markets to stabilize, and for Nomura to just break even on their non-Japan business.

Of course, I have always thought the best option for Nomura is to sell itself to a global investment bank that wants to do business in Japan.  Since they have a great franchise domestically and seem to not be able to succeed internationally, it only makes sense for Nomura to become the Japan arm of a major global bank.

Nomura is currently trading at half of BPS which is nominally cheap.  But I think there are many better opportunities out there in the financials; companies with better ROE histories etc...

On any bounce in the Japanese stock market, though, this is a major player so it will go up.  I just don't see it as that exciting due to the above, global expansion issues.