I can't believe how sloppy and bad some of these credit rating agencies are, and it's really obvious how dangerous they are.  We saw how sloppy and bad they were when things melted down in 2008/2009, but this came as a surprise because the perp is Egan-Jones, a small rating agency that wants to compete with the majors, Moody's, S&P and Fitch by being better and more independent (not paid by issuers etc...).

And then to only mention a long position in a market-making, hedged book of bonds seems highly ignorant of how investment banks work.  Incredibly sloppy thinking.

Thankfully, JEF responded quickly and clarified their positions.  However, Egan-Jones refused to back down and made a silly statement.

Here's a cut and paste from a Wall Street Journal article: 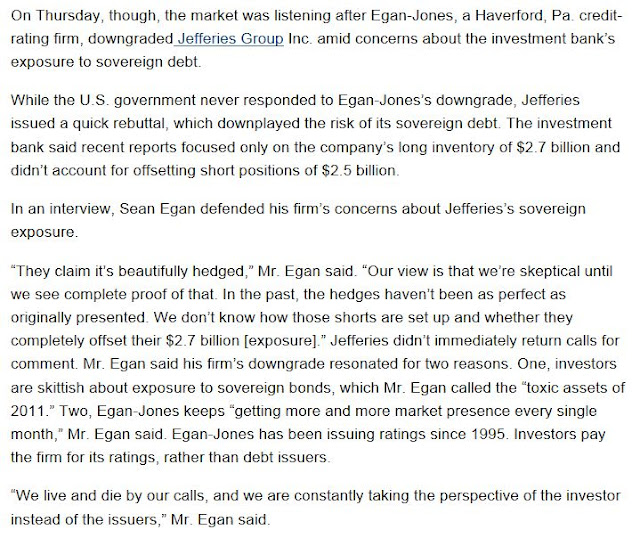 JEF did clarify that their short positions were in securities and weren't default swaps or other derivatives with credit risk.

This is no different than a long/short inventory position of equity market-makers.  Market-makers have billions in stock inventory but is mostly hedged and this has not been a problem, historically.

JEF responded with a series of releases.  Here's one of them: 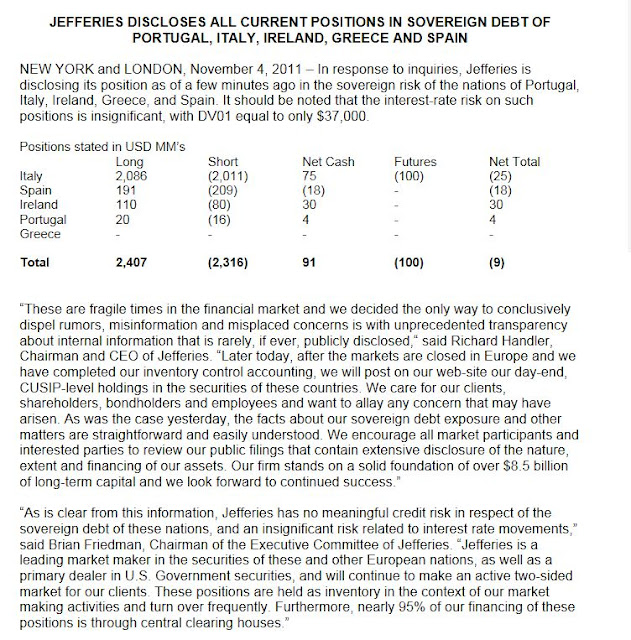 The position looks fine.  It's incredible that an analyst would only use a long position to evaluate a balance sheet without looking at what's on the other side of it.

Sure, Morgan Stanley blew $10 billion on poorly hedged mortgages during the crisis (or some such incredibly high number), but they were in fact highly complex products with risk characterstics that are very different than sovereign bonds, no matter the credit rating of the bonds (JEF does in fact specialize in high yield).

Why not mention only the long side of those positions too, which may look even more risky?

It is really scary that this sort of bad analysis can possibly cause a run on a perfectly healthy, fine company (I don't own any JEF, but have positive view about them.  Even the very vocal bank critic Meredith Whitney said JEF is run by a very good, conservative CEO).

Anyway, these are scary times to be sure for everyone.  People are very trigger happy; shoot first and ask questions later.  Or in many cases, just shoot, shoot, shoot and don't think or ask questions!