I was flipping through a book I bought a while ago while I was in Japan; it's a book about 41 CEO's of companies listed on the Tokyo Stock Exchange's "Mothers" market which is a sort of entrepreneurs' exchange.  The Mothers market was created to try to have a marketplace where young entrepreneurial companies can list shares, like the U.S. Nasdaq/OTC / pink sheets etc...

One criticism over the years in Japan was that there was a lack of entrepreneurs as there are in the U.S., and the over-regulated capital market system was partly blamed.  The Mothers market was an attempt to correct that.

I just looked but there are only 177 or so companies listed on the Mothers market (in accordance with my resolution to turn over tons of rocks, of course I will take at least a quick look at all of them soon), so I don't know if they actually succeeded.  The Mothers market and JASDAQ seem to be basically dead in Japan.

Anyway, flipping through that book, I did find something interesting, even though it may not be a great buy at the current price.  There are businesses in Japan that actually do have decent margins and ROE and seem to be growing.  This is one of them.  I will make posts about companies I find interesting even if I don't think it's a great buy at the moment.  If I only posted about great finds, then I might only have two or three posts a year. And if Buffett is right about five great ideas being enough in a lifetime, then this blog would be even deader than that.  Since I am going to be digging through a lot of stuff, I might as well jot down things I see along the way as it may interest others.  You never know; I often pass on things that other people love and vice-versa.

The company is called Nihon M&A Center, and it is exactly what you would think it is; it's an M&A advisory company.  Normally, I would skip past this right away as the M&A business is usually highly cyclical and prone to dramatic booms and busts.  But this one seemed a little different.

First of all, this company (Nihon M&A Center which I will call NMAC for convenience) was founded in 1991 as sort of a network of about 50 accounting firms across Japan.  I think the purpose was to share information regarding M&A of smaller firms.

NMAC was listed on the Mothers exchange in October 2006 and moved to the First Section of the Tokyo Stock Exchange in December 2007.

NMAC focuses on mergers and acquisitions of small, family-owned businesses with anywhere from 10 to 100 employees (and some with fewer than 10 employees).  Their network with accountanting firms, regional banks and savings and loans around the country give them a big source of leads, and that is one of their competitive advantages.  Many businesses are family owned in Japan, and succession is often a difficult issue.  It is apparently more common these days for small businesses to have no successors, so a sale is the only real option.  Also, a difficult economic environment also plays into the increase in M&A as it is one strategy for businesses under pressure.

Since NMAC deals in very small firms, they play in an area where the large investment banks don't get involved (too small to make a dent).   Their total revenues was 5 billion yen in the most recent fiscal year, or just $65 million; not too economical for large banks to chase this business.

According to a comment by the CEO in the book, there are at least 120,000 small businesses that are potential M&A candidates so he sees plenty of room for growth for NMAC.

Here is the number of deals they closed in the past few years:

I couldn't find any good data on the number of M&A deals closed in Japan recently, but I did find a good chart that only goes to 2008: 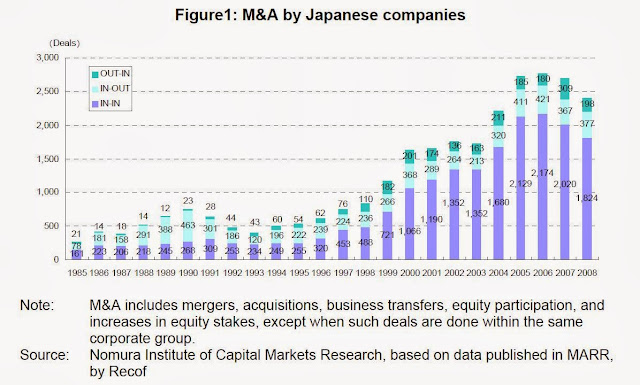 In any case, with 120,000 candidates for M&A in the small and medium sized business sector and over 2,000 deals per year done and NMAC doing only 83 transactions per year or so, this would seem to suggest plenty of headroom for growth.

When they start advising a buyer or a seller, they typically sign an advisory agreement and a fee of 1-3 million yen for sellers and 1-5 million for buyers is paid.  If a deal is consummated, then a percentage based on the deal value is paid.  I looked around in the filings and couldn't find an average fee rate that is charged.  This is one thing I will have to track down.

So anyway, let's take a look at some numbers (figures in millions of yen except per share figures, ROE, P/E and number of employees):

These figures almost don't look like a Japanese company; ROE and net margin (below) consistently above 20% with some decent growth.

Growth rates for the six years since 2005 were:

Here is the margin history: 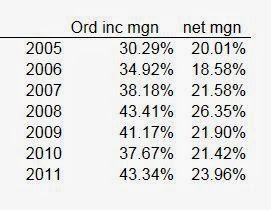 The stock price is trading currently at 405,000 yen/share, so that comes to a P/E ratio of 21.6x and a P/B ratio of 4.2x.   There is some cash and investments on the balance sheet that might take this valuation down a little bit, but not dramatically.  It's a 26 billion yen ($340 million) market cap company, so not exactly a tiny cap or nano cap stock.

This company does seem to be in an interesting niche with decent margins, ROE, growth and what seems like decent management.

The valuation is not at a level that would interest me as I don't like to pay for growth and I really don't have a good feel for the future growth potential of the business.  Is the recent boom in M&A a sustainable trend, or is it a one-time wave that will end like the real estate restructuring boom that occured (and died quickly after the deals were done).  I don't have a strong view on that.

I do think they are on to something very interesting, but it is a growth stock trading at a growth stock multiple.  There is nothing wrong with that and some people might be interested in this issue.

I will keep this on my watch list and will follow it going forward, but I won't be buying into this at this point.

An interest side story is that in the same Mothers stock exchange book that I am skimming through there is another M&A advisory firm.  It's called MCA Savvian with the ticker symbol 2174.  This one doesn't have the track record of NMAC and it does look like a lot riskier business than NMAC.  MCA Savvian seems to be chasing the big deals; the deals that the major investment banks and money center banks would be chasing after.

I don't want to post any details on MCA Savvian, but the biggest problem is that they are expanding worldwide with offices and presumably highly paid executives in a global branch network.  The problem here is obvious to me.  They want to go head-to-head with other more experienced M&A advisory firms (plenty of those in the U.S. and Europe), not to mention the  large global investment banks like Goldman Sachs and Morgan Stanley.

A quick reading of the history of the senior management doesn't indicate to me any 'edge'; I see no reason why the senior management in Tokyo would be able to do better than Nomura or other global investment banks in chasing after large M&A deals.   This is not to say that they can't succeed.  They may do just fine.

This is where NMAC differs and why it is at least an interesting idea; they stay focused on the Japanese domestic market and go for the small deals that large banks don't want to bother with.  It's definitely a niche area (even though I admit I don't have a grasp of the competitive dynamics in the sector; up and coming competition etc... Their large margins and returns on capital should attract competitors going forward).

However, MCA Savvian seems to be building out a global infrastructure even before establishing a strong profit base.  At least that's my impression from taking a quick look at it.  No niche area like NMAC, going head-to-head in larger deals with highly competitive global investment banks, expanding rapidly globally with no real 'experience' that I can see from the senior managers in Tokyo etc...   All of this, to me, spells trouble.

Email ThisBlogThis!Share to TwitterShare to FacebookShare to Pinterest
Labels: 2127