Here's another "Mothers" market stock I came across in my little CEO book (book of 40 or so "Mothers" market entreprenuer CEOs).  Only this time, something stood out so I decided to look into it a little bit.  In this case, the news isn't good.

When you dig through thousands of tiny stocks, 99.8% of them are going to be garbage so there really is no point in commenting on them.  Trash is trash, so what?  Already, on the Mothers market, I see so much junk; mostly internet related businesses with weak business models etc...  It's also remarkable how all the price charts look the same; like skateboard ramps, only in reverse (start high and comes down like the opposite of a parabolic price chart).

But this one stood out just because of the accounting.   I am no expert on accounting nor am I an expert on software companies, but this one was sort of interesting.  I'm not trying to sniff out frauds and find shorts either (I doubt you can even short most small caps in Japan).

I initially dug into this because it was a profitable company with decent margins and decent returns on capital; something rare in Japan and even rarer in the world of tiny caps.   And the stock price seemed reasonable.

At first, I thought this was an interesting company.  Of course, right from the get-go there is a problem with it as it is a B2B internet business.  They match buyers and sellers in the food industry in Japan, between manufacturers, distributors/wholesalers and restaurants/retailers.  This sounds like a good idea, but there is no telling who will dominate this category in five or ten years.  A lot of B2B's were born in the U.S. too with good-sounding ideas and concepts, but I don't know that any of them have turned into big, viable businesses.

Anyway, the company is Infomart (exchange code 2492) and it looked interesting.

Here are some metrics over the past five years that caught my attention (2006 - December 2010):

The profit margin here is the ordinary profits (sort of like operating profit).  So you see how this company is worth a look: decent ROE and margins and a price valuation that seems to be coming down.

Here are some charts from a recent investor presentation: 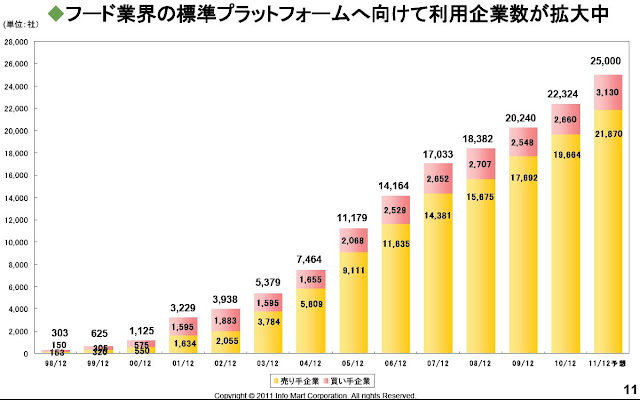 The above chart is the number of users of their B2B platform in the food industry. 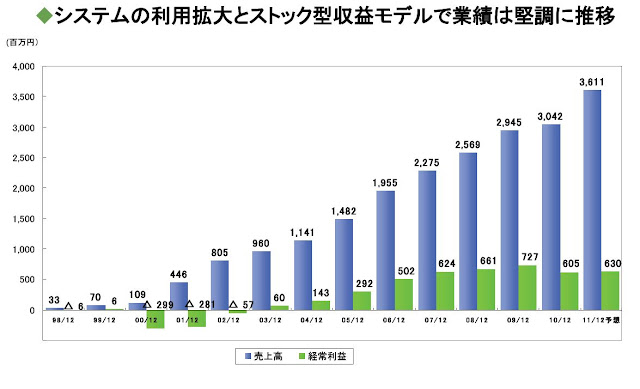 And this table shows the trend in sales and ordinary profits over the years.

Other than the fact that this is an internet B2B business, the figures look pretty good.  So despite my reservations about the business itself, I took a little peak under the hood and then nearly fell out of my chair.

The first thing I noticed was that this thing was eating up a lot of cash.   Here is their cash flows from operations and cash flows used in investing for the last five years:

Why is their cash spending so high for an internet business?   I was wondering if the cash used in investing was used to buy marketable securities or something like that, but then saw that most of it was going into purchase of intangible fixed assets.  I scratched my head on this one and then noticed that there was capitalized software assets on the balance sheet to the tune of 2 billion yen as of the end of September 30, 2011.

This 2 billion yen capitalized software expense stood out like a sore thumb because the total net worth of the company at the same time was 2.6 billion and total assets was 3.8 billion!  So a large chunk of the net worth of this business was simply capitalized expense.

In the first 9 months of 2011, ordinary income was 438 million yen and net income was 245 million yen.  Because of this capitalizing of expenses, of course, these figures to me were immediately suspect.  So I looked at the cash flow figures and sure enough, these profits were pretty much 'phony'.

Depreciation in this period (first nine months of 2011) was 453 million, but cash used in investing (purchase of intangible fixed assets) was a whopping 802 million yen.   So net that out and the total capitalized expense comes to 349 million yen.  So if Infomart 'expensed' their software develepment costs, their real profit would have been only 89 million yen.

Suddenly, the high ROE and margin story goes out the window.

Because there is a whopping 2 billion yen of software capitalized on the balance sheet, we already know that this has been happening in prior years.

Out of curiosity, I dug back a little in the filings to see how much of the past earnings might be 'phony' (I put 'phony' in quotes as this is only my opinion; this accounting may be totally valid.  But I looked at some software companies in the U.S.; AMZN in the earlier years, MSFT, CSM, N and I don't see anywhere near this kind of magnitude in terms of capitalizing software expense).

So from the above, we see that Infomart earned 3 billion yen in profits over the past five years, but 1.2 billion of that came from capitalizing software development expenses.  This means that the earnings *might* have been overstated by 1.6x if software development was expensed rather than capitalized.

An early Amazon annual report showed that all software development costs were expensed.  In later years, they seemed to have started capitalizing some software costs, but they are nowhere near this in magnitude; at least the capitalized software is not a huge presence on the balance sheet.

I looked at Netsuite too, as it seems to be a similar type of internet based service provider, and they too don't have any capitalized software on the balance sheet.  Salesforce.com (CRM) has some, but again, nothing so big stands out on the balance sheet as it does here.

While this accounting may be totally valid, and Infomart may go on to be a huge success, I don't know.  I would be a bit cautious on this one.

If you look at the "real" profits in the above table, you will notice that their earnings trend is not as wonderful as it seems on a reported basis.

Again, I didn't type this up as a short recommendation or to claim that Infomart is a fraud.

I am looking at everything this year and when I find something interesting, even if it is negative, I will post about it as a diary of sorts in my 'adventure'.

Email ThisBlogThis!Share to TwitterShare to FacebookShare to Pinterest
Labels: 2492