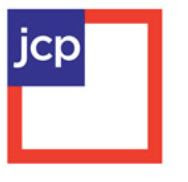 Ron Johnson joined JC Penny (JCP) as CEO back in June 2011 from Apple with great fanfare.  He is the guru that was behind the amazing Apple stores.  Ron Johnson was brought in after Bill Ackman (of Pershing Square Capital) and Steven Roth (or Vornado Realty Trust) took a large stake in late 2010 and got elected to the board of JCP. ﻿

Of course, JCP doesn't have the products that Apple does, so it's hard for me to imagine what Ron Johnson can do to transform this place.   What's he gonna do?  Install a glass staircase so people line up outside to buy...  jeans?

But you have to take a look when good investors like Ackman and Roth get involved with something.  Of course, most of the time you will take a good, hard look and still have no idea how this will work out.   Initially, I think the view was that Ackman and Roth were interested in JCP's real estate, but Ackman insists that is not the case at this point.  Roth is a retail guy (Vornado Realty), but he does have an interest in seeing JCP succeed as it is an anchor tenant in Vornado's mall in NYC (Manhattan Mall).  A revival in JCP would be very good for that mall.

One thing right off the bat we can say is that this is not Sears all over again.  The Sears trade was a great one initially (K-Mart bought out of bankruptcy on the cheap etc...), but didn't go too well after Lampert, a hedge fund operator and not a retail guy tried to run the place.

With JCP, Ackman and Roth are not at all involved with the retail operations.  They were involved with selecting and getting a good retail CEO.

Some may argue that an Apple guy can't run a department store, but Johnson started his career in retail (Target) so that's a good thing.

Over the past two days, Johnson unveiled their new strategy to transform JCP and turn it into a "America's Favorite Store".

I listened to the presentation online and thought it was interesting, even though I have no idea how much impact it will have on sales.  The stock price didn't react at all on the first day, but popped +19% today on the financial presentation.  I haven't heard that yet so I'll make another post after I listen to that.  Obviously, there were things there that got the market excited.

Anyway, Johnson started out by analogizing his moving to JCP with his quitting Target to go to Apple back in 2000.  People around him were surprised, wondering why he would want to leave such a hot retailer like Target to go to a non-entity like Apple.  He points out that his move to Apple was not a bad decision.

He says he sees the same thing now that he saw back then with Apple.  And when he told Steve Jobs that he is going to leave Apple to go to JCP, Jobs was surprised and didn't understand why he would leave such a hot company to move to a mediocre retailer.

Here are some tables from the presentation:

He says that when he quit Target to go to Apple, Apple had 3% market share and was losing money.  Apple now has 30% market share. 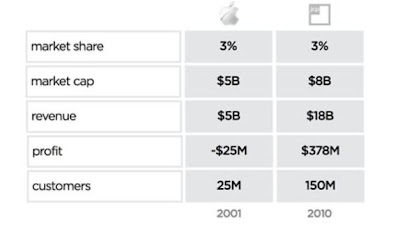 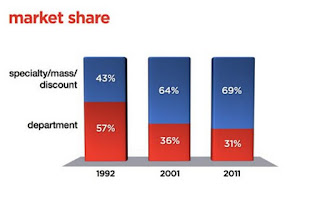 Here is an example of what JCP has done wrong over the years.  He first mentioned the P's of retailing:
It is said that if you can get one or two of these really down, you can do really well in retailing.

But what has happened with JCP is that they have really discounted their brand by their poor pricing strategy.

Here is an interesting chart Johnson put up to demonstrate this.   Between 2002 and 2011, JCP's retail prices have risen 43% while the cost of their products remained the same. 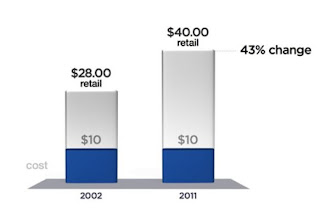 It looks like this should lead to higher margins and profits, but what actually happened?  Due to all the promotions, sales, specials and discounts, these prices were never realized.  Below is an interesting chart that shows that the real sales price for JCP products (I think he said this includes all items in JCP stores) have not changed at all over those years: 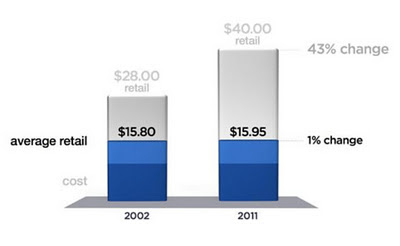 So raising prices only served to increase the "discount" rate that the products were sold for.  Johnson believes that this dilutes, or discounts the value of the JCP brand, the store. 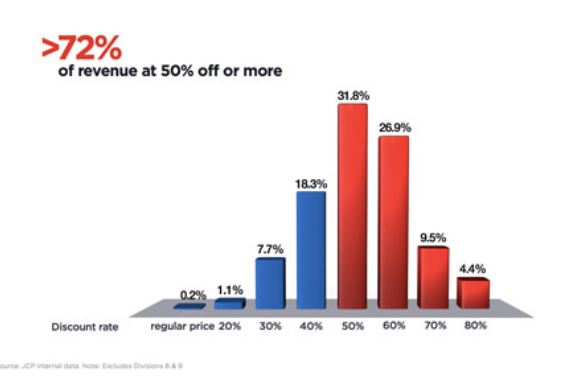 This shows that nothing is ever sold at the marked price,  and an astounding 72% of items are sold at a discount of more than 50%.   I guess that does look bad, as it looks like the store is going out of business if things are so marked down all the time.  At best, it makes the store look really bad in inventory management, having to mark prices down to clear inventory (this is not a discounter or off-price retailer like TJX/Marshall's). 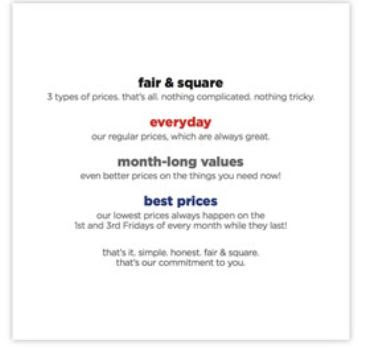 Johnson also presented his concept for JCP in the future.  One of them was to create more floor space by getting rid of the old fixtures; those old racks that have been used to hang clothes for decades.  He wants to use movable wall units to create wall space where images can be displayed with products hanging next to them; this will create more floor space instead of having the floor cluttered with racks like in old department stores.

Also a major new idea (for JCP, at least) is to break up the store into little stores.  JCP has had great success with Sephora stores;  Sephora stores inside of JCP stores have sales per square foot of $600 versus $200/square foot for the rest of JCP.

The idea is to create, eventually (by 2015) 100 stores within JCP stores.  They will start with brands they own that are popular, like Liz Claireborne, Izod and others.

I didn't think that was a particularly new concept, but I suppose it's new for JCP.  (Higher end department stores have had stores-within-a-store for a long time, I think)

JCP will also have Martha Stewart stores inside of them, and Johnson announced that Ellen Degeneres will be a spokesperson (or whatever you call it) for JCP, being featured in TV commercials, and stores being promoted on her show.

The other new concept was to move jewelry and watches out of the center of the store, which has been the standard forever.  They will move jewelry somewhere else and replace it with a Town Square.  He didn't give much information about what the Town Square will be, but the hint was that at Apple stores, a good half of the floor space is devoted to services and activities other than selling products.  What can this be in a department store?   Someone to patch torn jeans?  Repair shoes?  Probably not, lol...   Maybe some virtual/technological fashion advisor?  Play area for kids?  Who knows.

Anyway, I'm not a retail guy so I have no idea what all of this means so I will just have to watch as the story unfolds.

I have to say that this stuff does actually make me want to go to JCP, even though I hate shopping, just to see how it goes.

I will listen to the replay of today's investor day presentation later and will post my comments about that tommorow.
Posted by kk at 4:37 PM

Email ThisBlogThis!Share to TwitterShare to FacebookShare to Pinterest
Labels: JCP