So I listened to the second day presentation.  This was more of an investor day with financial details.  Much of the presentation was done by Michael Kramer, the COO of JCP.  He too comes from Apple retail where he was CFO of the retail business, he became CFO of Abercrombie and Fitch and then later CEO of Kellwood, a supplier to department stores.  So Kramer has a lot of retail experience.  This is good.

Like yesterday, Kramer started off talking about how department stores have dropped the ball and how that doesn't make any sense. 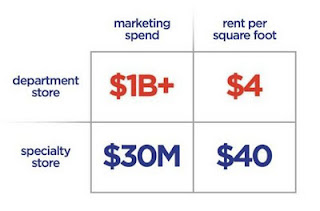 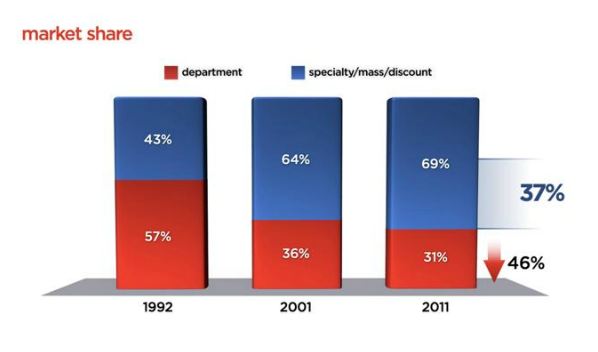 Johnson showed this chart yesterday, but a little more detail shows that of the 69% that is not department store sales, 37% of the total is actually specialty stores (the rest are discount retailers etc...).

So what happened?  Johnson yesterday spoke of the deterioration of the 6 P's.  Kramer says that department stores have basically lost sight of their customers.

Kramer said this is one of the problems that department stores have.  They think financially that the unselling product is OK to have in the stores as they get paid back by the vendor.  But what happens to the customer?  If you have stuff they don't want on the shelf and you are OK with that because someone else is paying you, that's not a good long term strategy.  Eventually, the customer will stop coming.  (They did say that JCP does not have this problem).

How will all this 'change' be paid for?  They already talked about how they can redirect all that money they spent doing the 590 promotions that nobody responded to to better, more effective and less frequent promotions.  The press reported that $80 million will be spent on promotions but failed to mention that this is cost that is coming out of the 590 promotions they did before, so I don't think there is a net increase in spending there.

Costs
Kramer pointed out that corporate overhead at JCP is a bit higher than Kohl's (KSS), a competitor, and they feel they can bring JCP's cost down to KSS's level. 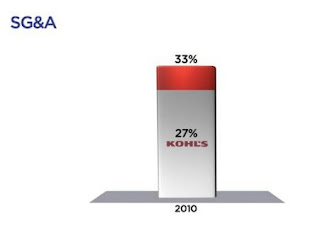 By bringing SGA level down to KSS's would be worth $1 billion in savings.  That's pretty big for a company with $18 billion in sales (that would lift operating margins by more than 5%). 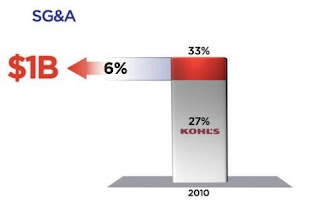 They can't do this overnight, so they will cut costs over time towards 2015. 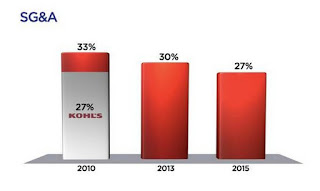 Where will the savings come from?  They have identified areas of savings in the following areas: 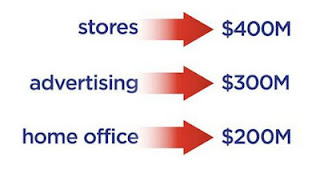 (I know I am getting a little trigger happy with the Windows 7 "Snip" function.  I have to admit, it's pretty convenient!).

They can also save labor costs by increasing labor productivity.  The amount of labor hours to operate a store at JCP is much higher than at KSS, and they think they can get it down to KSS's level.   If they do, that can amount to a lot of costs saved: 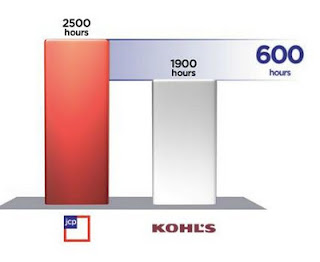 Advertising cost is also a bit higher than the competition and they think they can get that down too. They believe that events, brand/store announcements and things like that will offer a lot of free publicity over the next few years as they develop their stores. 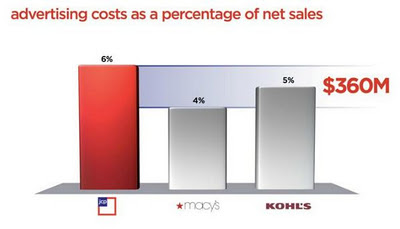 Also, corporate headquarters is inefficient with too many layers of management that they plan to cut down: 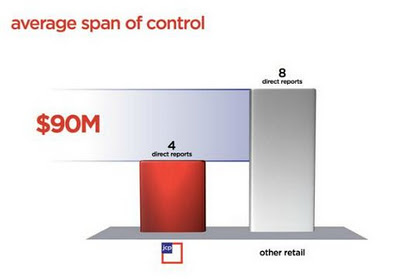 Span of control is basically how many people directly report per manager.  Increasing this, (or cutting layers) can save $90 million.

Another example of cost saving Kramer mentioned was the number of cashier stations in the store.  There are currently a lot of them where they are not utilized at all except during peak times (he said they are "rarely used") and yet the stations are still staffed even during off peak hours.  By shutting these stations, they can save $100 million. 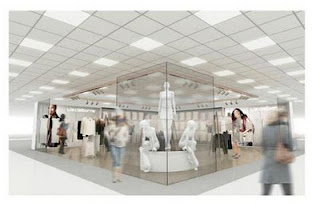 So with these and other initiatives, they expect $900 million in savings over the next two years.   They plan on getting SGA down to less than 30% of sales by 2013.  They will spend $800 million in capex in 2012 for the transformation which includes the development of the first 10 shops in their stores, investments in store infrastructure, IT and inventory for changes in the store (movable walls etc...).

How Do They Lift Sales?
Shops in the stores and partnerships with brands should increase traffic and help sales.  When Sephora was put into JCP stores, it lifted sales +2% in the rest of the store.

Some argue that Johnson was able to create the great Apple store because Apple had great products, but the fact is that throughout the existence of Apple stores, they were never the cheapest seller.  Customers were always able to buy the very same Apple products for less at Best Buy or on Amazon.  And yet the Apple stores have done so well.  The Apple stores also never got preferential treatment despite begging by Johnson.

By December 2015, they will have 100 shops in their stores and the transformation will be complete.  At this point they expect:

Also, there is potential for more JCP stores.  The number of stores in the top 50 MSA's (market service area) are as follows:

This implies that there is potential for 300 more stores.

JCP believes that with better, simpler pricing, partnerships with key brands and instore shops and their Market Square concept will drive traffic and help boost sales.

Investor Updates
JCP going forward will only provide annual guidance, and sales will be announced only quarterly instead of monthly.

There was a question from an analyst with respect to some suppliers/vendors saying that orders from JCP are down 10-15% for the spring season.  The question was whether JCP is expecting sales to be down.  Johnson said that this is not the case; that their inventory turns are a bit lower than the competition and they are just managing their inventories down a little bit to get the turnover up to more competitive levels.

JCP does not expect sales to slump during the transition, nor do they expect the new pricing scheme to reduce sales.

I noticed that the press were writing things like "every day low price" or that JCP will deeply discount to get sales up, but that's not really the case.  As you can see from the slide in the JCP presentation yesterday, they expect to sell things at the same price they have been selling it at; just not with sales and promotions so much.  The impact on revenues should be zero (all else equal).

(for reference, the sales-to-inventory ratio at KSS was 5.6x compared to 4.8x at JCP on a last four quarters average basis).

So what does this all mean to the investor?  What we know is that they want to get to a 13% operating margin by 2015 by maintaining gross margins above 40% and getting SGA down to 27%.  If we assume sales to be flat (just to be conservative), what kind of EPS are we looking at?

At the current $41.00 or so per share, JCP is trading at 6.9x what JCP could earn in 2015.  If JCP succeeds in this transformation, then a p/e ratio of 15x is not at all unreasonable, as even mediocre retailers have traded at that multiple in normal times.

The great thing about this analysis is that it assumes zero sales growth when in fact, if the transformation is successful, it is more likely that sales will grow over time.

I think Saks p/e ratio is high due to their depressed earnings so it may not be an indication.  Morningstar's industry average p/e ratio, however, is around 15x.

I just grabbed some operating margin figures from Morningstar and created the below table so we can see how the 13% operating margin compares to other department stores and over time.  Is it doable?

I don't see anyone achieving 13% operating margins in the department store sector even in the good times of 2006-2007.  Peak margins even at Kohl's seem to be around 11.7%.  So JCP is aiming for something even better than what Kohl's did during the best of times.  But then even Macy's achieved a 10.8% margin in 2006, so maybe it is doable.

Conclusion
The 13% margin does look aggressive given the table above, but these guys are really overhauling JCP in a major way so it may happen.  If it does, there seems to be plenty of upside in the stock price, even after the close to 20% rally on the presentation.

I don't own any JCP at the moment; these things are very hard to evaluate.  Who knows if they will succeed or not?

An interesting point is that since this makeover doesn't include anything drastic on the balance sheet, like huge debt increase or massive financial engineering, like repurchasing shares (or leveraged recap) at the expense of capex and store maintenance, there might be little risk involved.

If the makeover fails, what happens?  JCP goes back to being what it was; a mediocre department store?  This may not be such a disaster on the downside.

JCP stock has traded in the range of $20-40 post crisis (excluding the 2009 panic low) before Johnson came on board.  So let's say that if this doesn't work out, JCP goes back to $30/share.

Not bad at all.

As usual, this is not a stock recommendation.  I don't have any more insight than anyone else on whether this 'transformation' will succeed or not, which will be the primary driver of the stock price going forward.  I may buy and sell this stock in the future according to how things develop.

Email ThisBlogThis!Share to TwitterShare to FacebookShare to Pinterest
Labels: JCP