So, I was flipping through some annual reports, catching up on the ever increasing pile of stuff to read.  Occasionally, something comes out and grabs me and I have to investigate.  The great thing about annual reports is that you learn all kinds of things reading them, not just about the company.

This chart came from the 2010 annual report for Barrick Gold, (or I suppose it's just called Barrick now) in the letter to shareholders section written by chairman and CEO Peter Munk.

He said that there is a lot of talk of gold in a bubble and showed this chart to prove that gold is not in a bubble.  He said that in 1980, gold rallied 250% in a single year and that gold recently has done nothing close to that.  The gradual rise in gold prices over the past decade has been orderly and not at all bubble-like.

I thought that was interesting for sure.  But I still couldn't get over the parabolic-ness and one-decision-ness of the gold story so I decided to take a quick look at other bubbles in the past.

This, "gold is not in a bubble because there hasn't been a blowoff" argument vaguely reminds me of the housing bubble. Yes, housing prices are up a lot in the recent past, but they are not up like other bubbles in terms of magnitude.  Yes, it's expensive but it could get more expensive, just like Japan did; we are nowhere near where Japan was etc...

Well, anyway, let's take a quick look at this. 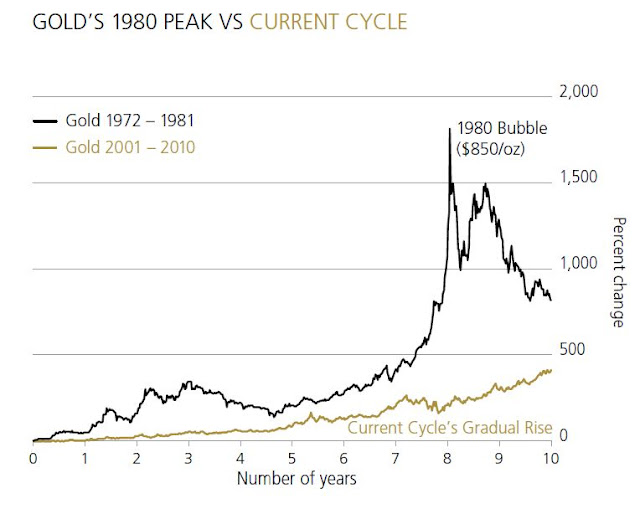 There is no question that compared to the 1970s, gold has done nothing and is not bubblish at all.  But I have to wonder if this is a good comparison as gold prices were pretty much fixed for most of the 20th century; the delinking of gold from money caused a catch up in prices to make up for 50, 70 or more years of inflation.

This is certainly not the case now as gold has been freely traded for a long time.

I'm way too lazy to do accurate work here, but just from eye-balling and grabbing quick prices off the internet, I came up with an approximate five year and ten year price change in these respective bubbles.

So looking at it this way, it does look to me like it is in line with other big bubbles.  Again, I would think that the 1970s-1980 gold bubble may not be much of a comparable due to the extraordinary event that preceded the delinking (fixed gold price).

In any case, I am not a big fan of gold at this point for the reasons I stated in my post back in October 2011   and I still think it is too much of an 'inevitable' investment;

So when the above self-reinforcing cycle is in effect and the chart looks parabolic (I am parabolic-phobic), and people tell you that in almost any scenario gold prices has to go up, I just lose interest in it.

Would I short it?  Heck no.  Am I convinced gold prices must crash or go down?  Absolutely not.  Can gold continue to go up?  Of course!

When the bull case is that we are nowhere near the 1980-type of bubble and in order to make decent returns, such a bubble has to recur, it sort of sounds more to me like a gamble than a rational investment.

There are a lot of people way smarter than me that like gold and that's great.

For me?  Nah.   I want to own something that is unloved, hated, despised, and cheap. Gold right now seems almost the exact opposite.

Notes
Here is the 'rough' data I used for the above analysis just for future reference: